Flying out of Kolkata airport to be costlier from February 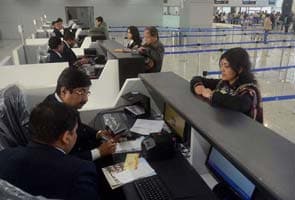 Domestic passengers would have to pay Rs 400 per ticket as UDF, while those flying to foreign destinations would have to shell out Rs 1,000 more when they travel from February 16, according to the order of the Airports Economic Regulatory Authority (AERA).

While airport development fee (ADF) is levied to meet cash flow requirements before completion of an airport upgrade project, UDF is charged for using the completed facility.

UDF is being charged at the Netaji Subhash Chandra Bose International Airport with the Airports Authority of India (AAI) completing the prestigious project that was inaugurated by President Pranab Mukherjee last Sunday. At present, ADF is levied at private-led Delhi and Mumbai airports, among others.

Promoted
Listen to the latest songs, only on JioSaavn.com
The regulatory body also fixed the charges for services like landing, navigation and parking charges and fuel throughput, which the airlines would have to bear.