Kolkata Metro Railway Corporation had moved to high court seeking its permission to move the machine for maintenance work. 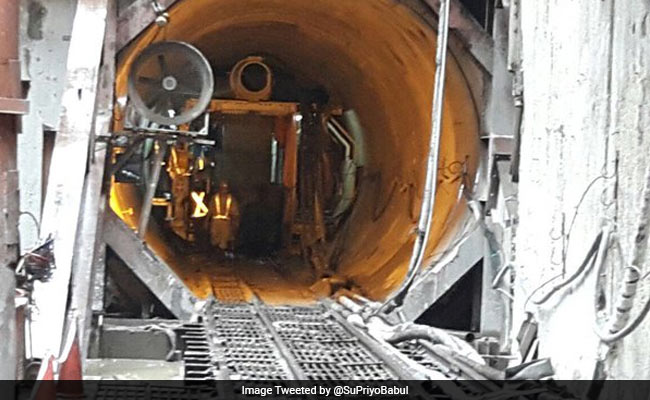 The Calcutta High Court allowed the Kolkata Metro Railway Corporation (KMRC) today to move a tunnel-boring machine up to five metre in the city's Bowbazar area, where an aquifer burst in August during drilling operations, lead to several houses collapsing.

The KMRC had moved to high court seeking its permission to move the machine for maintenance work.

In September the court ordered suspension of the tunneling work for the East-West Metro corridor, following the Bowbazar incident.

A division bench comprising of Chief Justice TBN Radhakrishnan and Justice Arijit Banerjee directed KMRC to work in accordance with the recommendations of an expert committee on shifting of the boring machine.

The bench directed KMRC to submit a report on completion of the work by December 16, when the matter will be taken up for hearing again.

An expert committee submitted a report to the court on Friday, saying the shifting of the tunnel-boring machine by up to five metres was necessary for maintenance work and would be done under its supervision.

"The committee members are of the unanimous opinion that the shifting of the machine by about five metres will not result in soil subsidence and as such will not affect life or property above the ground over the distance over which the machine is proposed to be shifted," the report said.

The KMRC, which is executing the East-West Metro project in the city, had told the high court on November 8 that the boring machine was at the site since the accident on August 31 and moving it by five metres was necessary to ensure that it remained functional.

The committee has proposed that the ground around the boring machine be sealed with polyurethane grout and work be carried out under the supervision and in the presence of its chairman, Leonard John Endicott, a geotechnical expert from Hong Kong.

The other members in the committee include Guy David Christopher Bridges, a tunnel-boring machine expert from Hong Kong, Neelakantan Kumar Pitchumani, a geotechnical expert from Chennai, and Suman Dutta, a structural expert from Kolkata.

The report also suggested that additional monitoring points be installed on the surface and below to detect any ground movement.

The court is hearing a Public Interest Litigation (PIL) seeking termination of underground drilling for metro tunnels in congested areas. The PIL has also challenged the provisions of the Metro Railway (Construction of Works) Act, 1978.

Two machines were deployed to dig parallel tunnels for the underground East-West Metro line, one of which had hit a water pocket, leading to a huge ground subsidence.

The KMRC has told the court that work for 9.8 km of the 10.9-km-long underground tunnel has been completed for the metro corridor.

Tunnels have been bored under the Hooghly river to connect the twin cities of Kolkata and Howrah through the rapid transit system, spanning a length of 16.6 km from Howrah Maidan to IT hub Sector V in Salt Lake.

The new corridor passes through some of Kolkata's most-congested areas, dotted by century-old buildings, several of which are in a dilapidated condition.