Hanan was all smiles while walking the ramp at a fashion show organised by the state-run Kerala Khadi Board. 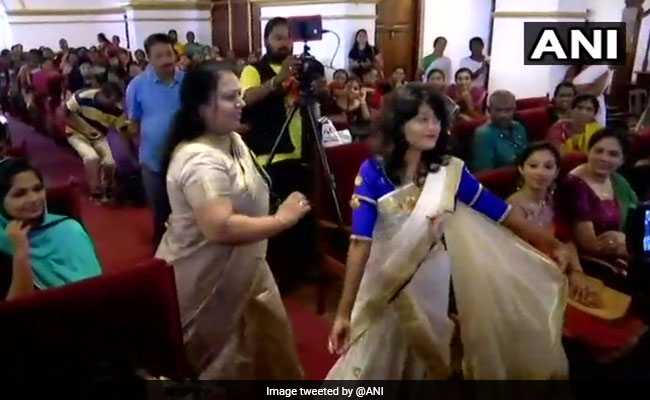 21-year-old Hanan dressed in a traditional saree for the fashion show.

Hanan, a 21-year-old college student from Kerala who was trolled on social media for selling fish after her classes walked the ramp wearing a traditional saree to promote Khadi products in Thiruvananthapuram.

The 21-year-old was viciously trolled and faced cyber bullying after the story of her struggle to fund studies and take care of her family was widely shared on social media.

Clad in a designer Khadi Kerala half-saree, Hanan walked the ramp amid thunderous applause from the audience at the Kanakakkunnu Palace in the heart of the city.

The stage and packed audience were not new to Hanan. She had earlier worked as an anchor and flower girl for programmes, to earn some money.

Khadi Board Vice Chairman Shobhana George said Hanan was thrilled to be a part of the event.
"She considered the opportunity as recognition for her struggles to stand on her feet. She walked the ramp very confidently. Everyone appreciated her after the programme," MsGeorge told PTI.

The board would give similar platforms to her in future if any suitable opportunity arose, she said.

Hanan had visited Chief Minister Pinarayi Vijayan and opposition leader Ramesh Chennithala and thanked them for their support before taking part in the fashion show. She had described herself a "daughter of the government"

The Chief Minister had directed  police to initiate action against the cyber bullies following which a man had been arrested under various sections of the IT Act and the Indian Penal Code.