The Story Of Sabarimala: Origin, Beliefs And Controversy Over Women Entry

Sabarimala temple is dedicated to Ayyappa, the God of growth. Prince Manikandan is considered an Avatar of Ayyappa. It is believed that he meditated at Sabarimala temple and became one with the divine. 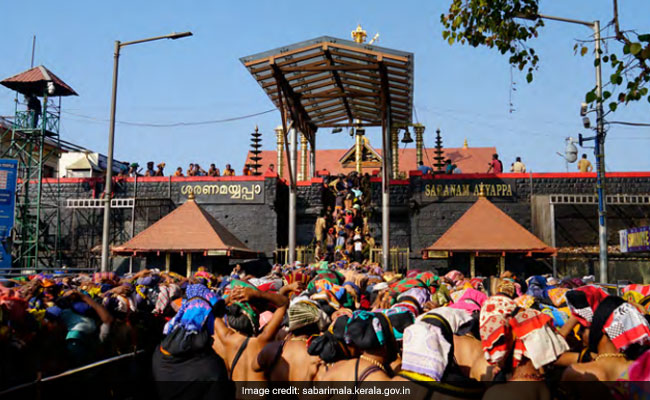 The pilgrims of Sabarimala have to reach the temple through difficult treks.

Sabarimala is a prominent Hindu temple located on a hilltop in Kerala's Pathanamthitta district. It is surrounded by 18 hills in the Periyar Tiger Reserve. The temple is dedicated to Ayyappa, the God of growth. The temple attracts pilgrims from Kerala, Tamil Nadu, Karnataka and Andhra Pradesh and from various parts of the country and the world. The temple is open for worship only during the days of Mandalapooja in November-December, Makara Sankranti on January 14 and Maha Vishuva Sankranti on April 14, and the first five days of each Malayalam month.

Sabarimala is an ancient temple. It was mostly unreachable for about three centuries after its installation. In the 12th century, a prince of Pandalam Dynasty, Manikandan, rediscovered the original path to reach Sabarimala. He had many followers with him, including the descendants of the Vavar (a Muslim warrior whom Manikandan defeated) family. This Prince is considered an Avatar of Ayyappa. It is believed that he meditated at Sabarimala temple and became one with the divine.

The pilgrims of Sabarimala have to reach the temple through difficult treks in the forest as the vehicles cannot reach there.

The pilgrims have to observe celibacy for 41 days before going to Sabarimala. They are also required to strictly follow a lacto-vegetarian diet, refrain from alcohol, not use any profanity and allow the hair and nails to grow without cutting. They are expected to bath twice in a day and visit the local temples regularly.

They wear black or blue clothes, do not shave until the completion of the pilgrimage, and smear vibhuti or sandal paste on their forehead.

The ban on women entering the temple premises is being practised for centuries, as devotees consider Lord Ayappa, the presiding deity of the temple, to be celibate.

In 1991, the Kerala High Court restricted entry of women above the age of 10 and below the age of 50 from Sabarimala temple as they were of the menstruating age. 27 years later on September 28, 2018, the Supreme Court lifted the ban, saying that discrimination against women on any grounds, even religious is unconstitutional.

Temple's head priest, Kandaru Rajeevaru, said they were "disappointed" by the court order but accepted it.

Following the court's order, hundreds of Ayyappa devotees, including women, blocked the state and national highways in various parts of Kerala.

The protests took a political turn after BJP ally Shiv Sena warned of "mass suicides" if women set foot inside the Sabarimala temple. The protests intensified as the date of opening neared. On October 17, when the doors to Sabarimala opened, the protesters camped at the base of the trek at Nilakkal and and at the last stretch of the trek at Pamba to stop women from entering the temple.