Protests broke out in various parts of state after the entry of the two women. 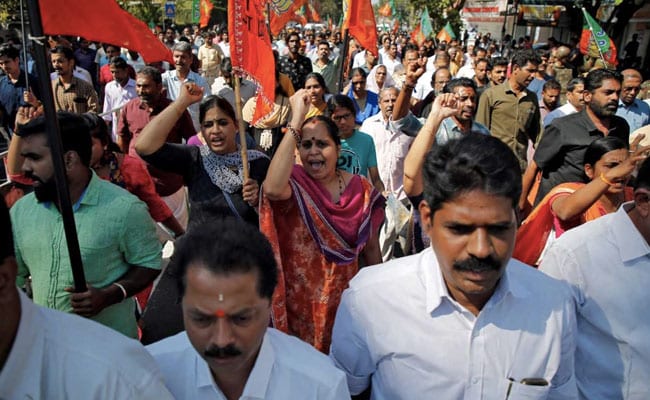 Protests have erupted across Kerala after two women below 50 walked into the Sabarimala temple in Kerala before daybreak on Wednesday, becoming the first to do so since the Supreme Court ordered the end of a decades-old ban on women of menstrual age entering the shrine. The ruling BJP and other groups have called for a state-wide shutdown today. The Congress-led United Democratic Front said it would observe a "black day". A Sabarimala Karma Samithi activist who was injured during stone pelting in yesterday's clash has also succumbed to the injuries.

In a video accessed by NDTV, the women were seen hurrying into the shrine, dressed in all-black and escorted by the police yesterday. The temple was later shut down for ritual "purification" briefly before reopening to devotees.

Here are the Highlights on Sabarimala Temple:

Jan 03, 2019 17:32 (IST)
The Congress-led United Democratic Front (UDF) alleges that the law and order has collapsed in Kerala following the violence during a shutdown.
Terming it a "state-sponsored action", the party says the "immature" and "arrogant" approach displayed by Chief Minister Pinarayi Vijayan in handling the issue was the reason for the tension.
Jan 03, 2019 16:48 (IST)
Sixty workers of a Tamil Nadu-based fringe Hindu outfit have been arrested for trying to stage a 'rail-roko' in protest against the entry of two women. The Hindu Makkal Katchi activists were prevented from staging the protest at a railway station in Coimbatore, the police say.
15 members of the Bharatiya Janata Party lawyers' wing in Coimbatore burn a portrait of Kerala Chief Minister Pinarayi Vijayan. They also raised slogans against him for failing to maintain the shrine's "sanctity"
Jan 03, 2019 16:45 (IST)
The All India Democratic Women's Association has expressed strong objection to the purification rituals carried out by the priests after two women of menstruating age visited the Sabarimala temple, calling it "demeaning" as it projects women as "impure" and "unclean".
Jan 03, 2019 15:09 (IST)
After attack on media yesterday, media has boycotted three BJP /RSS press conferences in Kerala today.
Jan 03, 2019 14:48 (IST)
3 BJP workers have been injured in Thrissur and admitted to hospital.
Jan 03, 2019 13:05 (IST)
Asianet cameraperson Biju attacked by BJP workers during protest in Trivandrum. 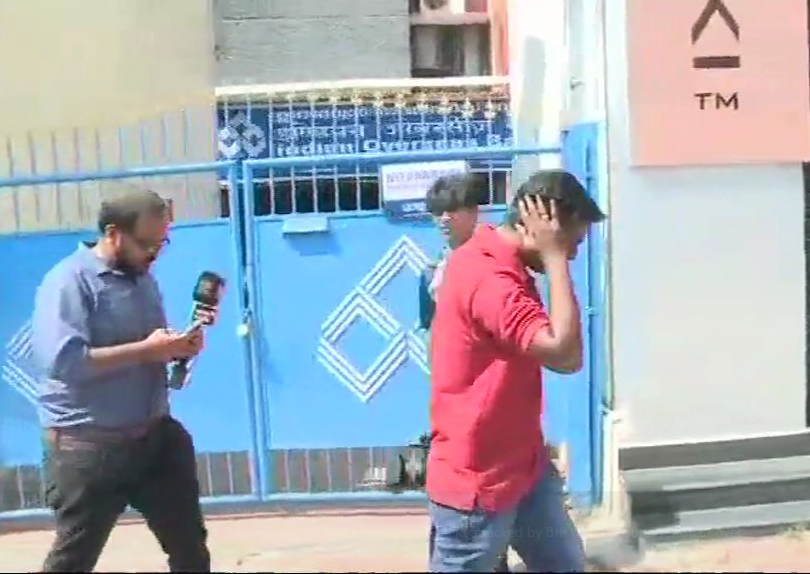 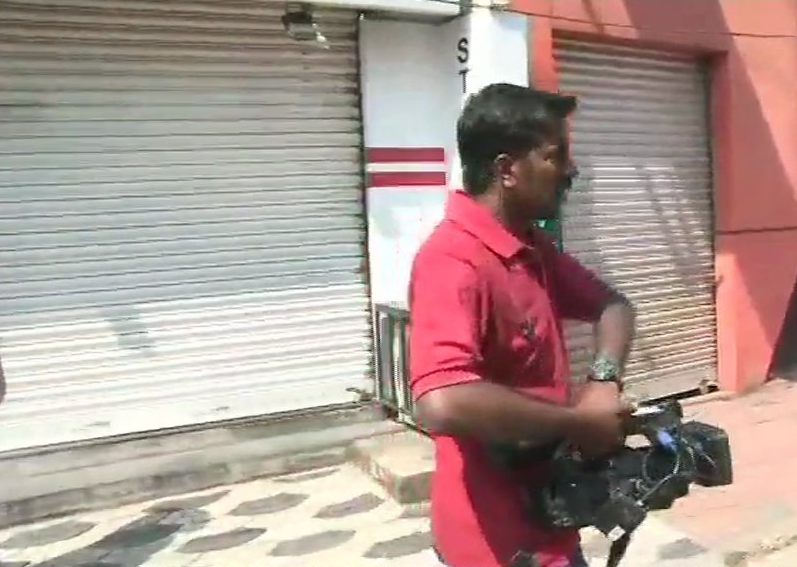 2 Women Who Entered Sabarimala Not Opposed By Devotees: Pinarayi Vijayan
Kerala Chief Minister Pinarayi Vijayan said today that the two women who entered the Sabarimala temple yesterday defying a traditional ban on women of menstrual age faced no opposition from devotees. The women's entry has led to massive protests across Kerala and a shutdown call by rightwing groups.
Jan 03, 2019 12:07 (IST)
Protests over entry of women entering Sabarimala spreads to Karnataka
Protests on the issue of women under 50 having entered the Sabarimalala shrine spilled over into neighbouring Karnataka too. Right wing groups held a protest at the Mysore Bank Circle in Bengaluru against the entry of women.
The Karnataka BJP has been critical of attempts by women to enter Sabarimala - with BJP member in Parliament from the state, Ananth Kumar Hegde, going so far as to say that the Kerala government had entirely failed and that it was a "daylight rape" of Hindus.
Jan 03, 2019 12:04 (IST)
Visuals from Sabarimala Karma Samiti and BJP workers protest march in Pandalam. 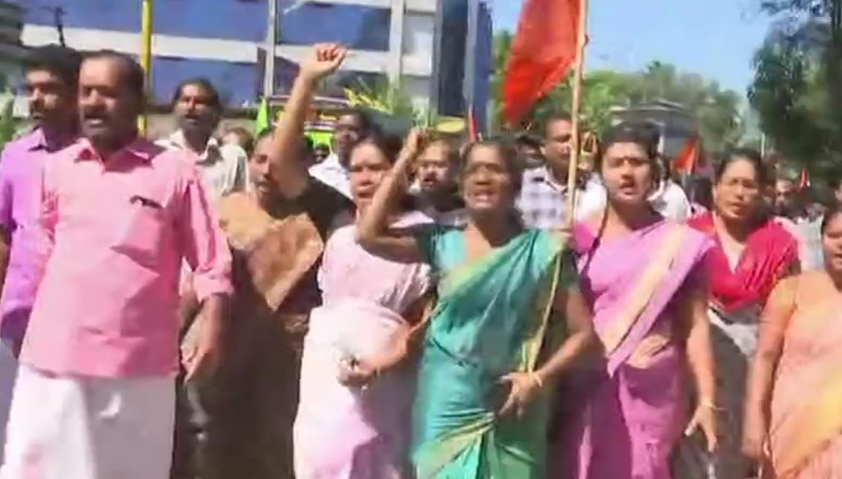 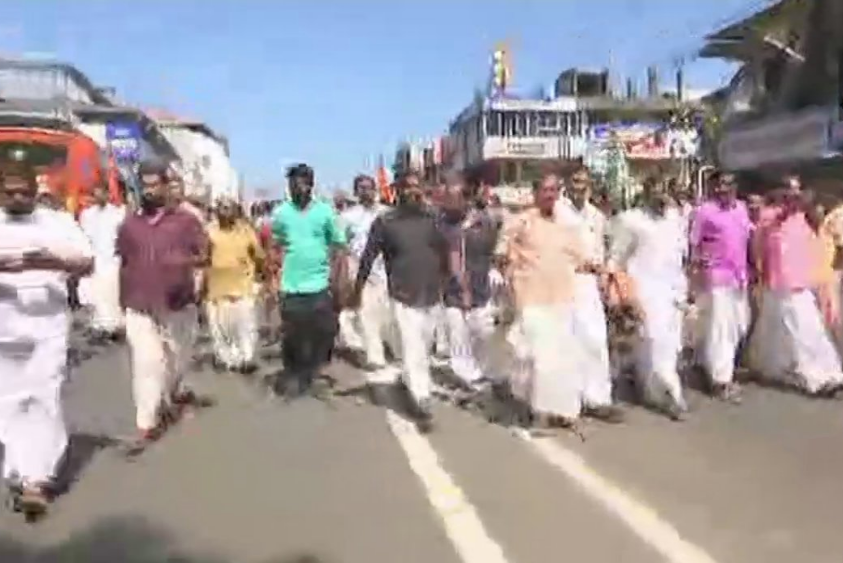 Jan 03, 2019 12:02 (IST)
PGS Varma, member of royal Pandalam family says on Sabarimala that, "Kerala government is taking measures everyday to send someone there to disturb its rituals. It's festival time when per day 1-2 lakh people used to come to temple but due to government action, it has reduced to 10-15,000 now." 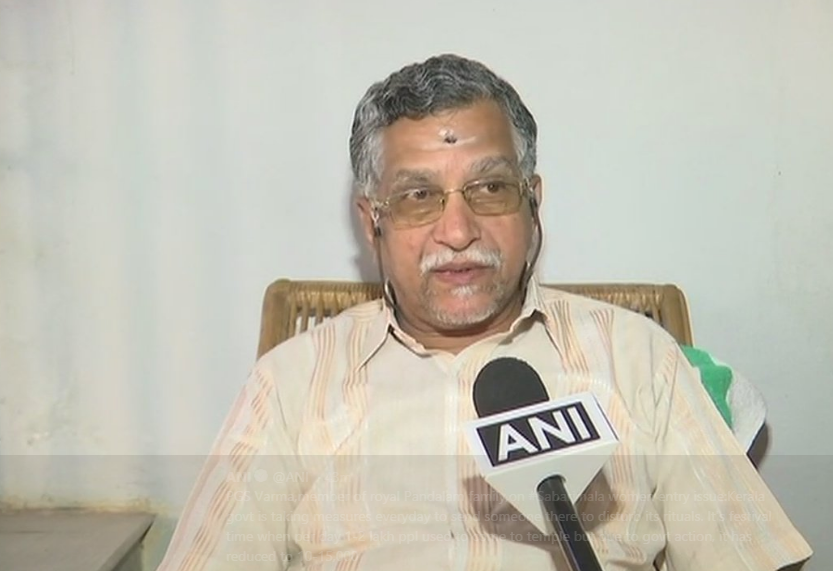 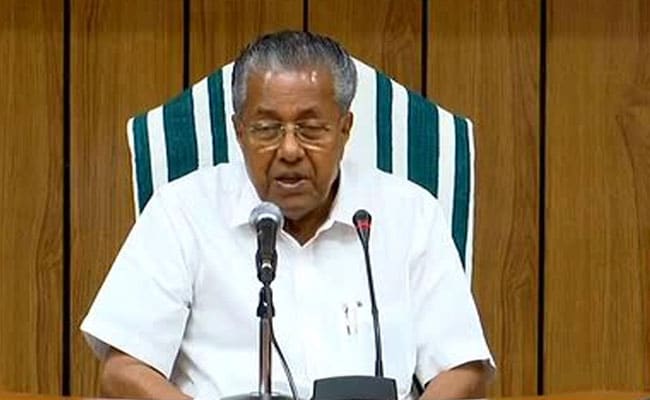 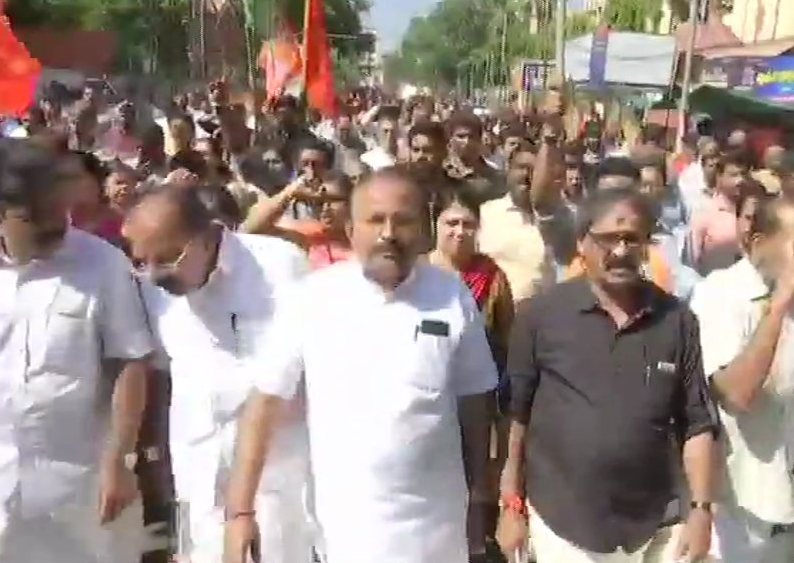 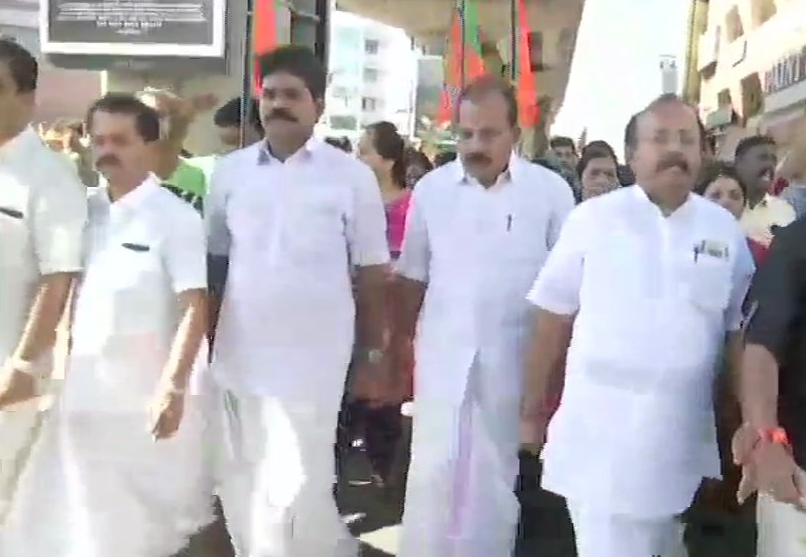 Jan 03, 2019 10:58 (IST)
CJI declines hearing on Sabrimala contempt petition
Chief Justice of India (CJI) Ranjan Gogoi declines urgent hearing on Sabarimala contempt petition. Review petition is already listed on 22 January. Two contempt petitions were filed as the shrine was controversially shut down for an hour and a half for "purification".
Jan 03, 2019 10:44 (IST)
"2 women who entered Sabarimala were maoists", Says V Muraleedharan
BJP national executive member and MP V Muraleedharan say's, "Yesterday 2 women who entered Sabarimala Temple. They weren't devotees. They were Maoists. CPM with selected policemen prepared an action plan and then saw to it that the women go inside the temple. This is a planned conspiracy by Maoists in league with Kerala government and CPM." 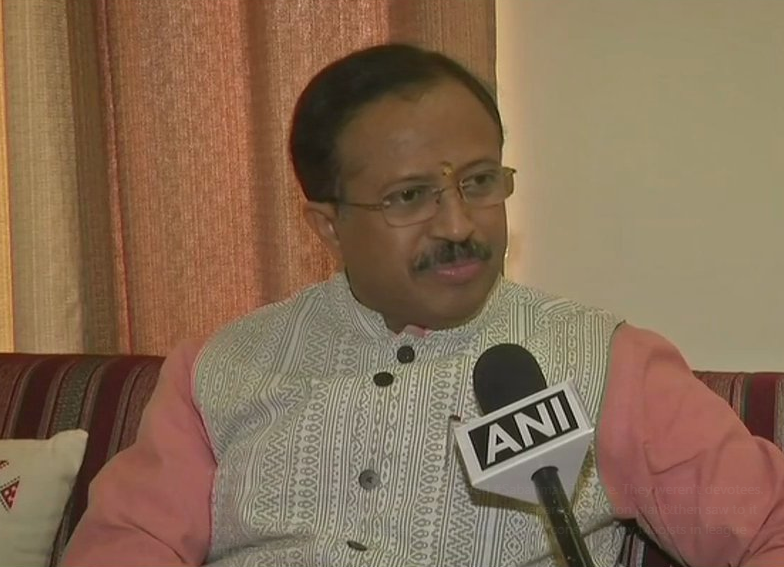 Jan 03, 2019 10:35 (IST)
Two people have been detained by police in connection with yesterday's violence and stone- throwing incident in Pandalam after the entry of two women into Sabarimala temple yesterday.
Jan 03, 2019 10:33 (IST)
Ambulances are used to help stranded passengers at Thiruvananthapuram Central as bus services are affected in the area due to strike called by organisations. 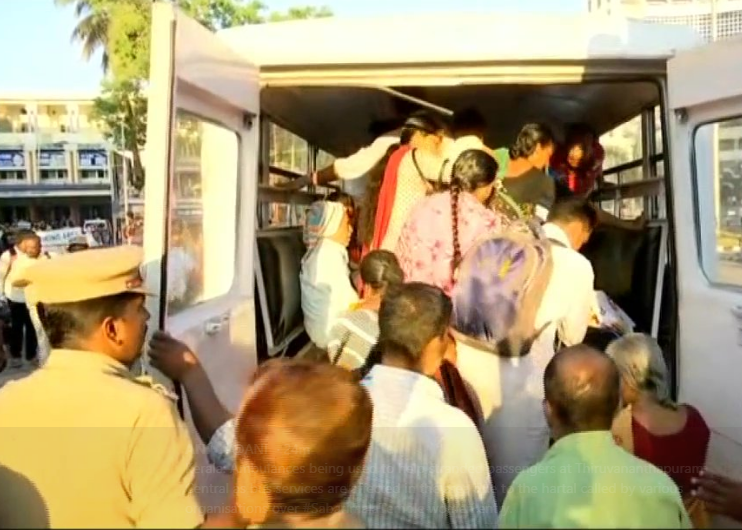 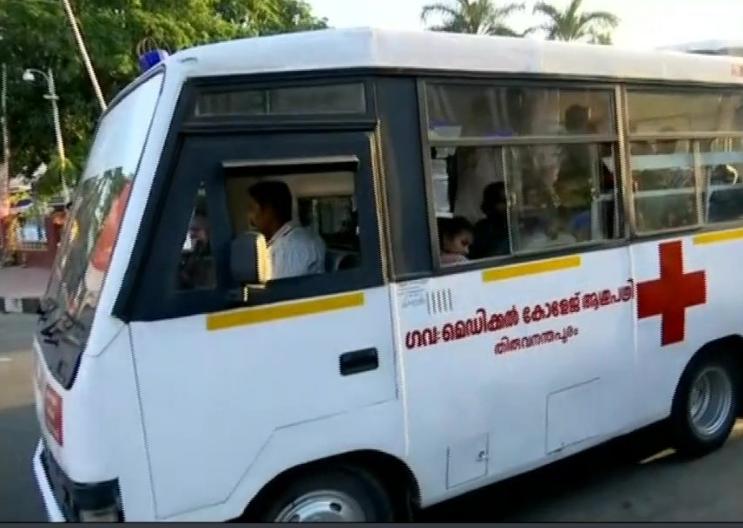 Jan 03, 2019 10:07 (IST)
PS Sreedharan Pillai, BJP Kerala President says, "We will carry on with our agitation in a peaceful manner and abide by the law of the land." 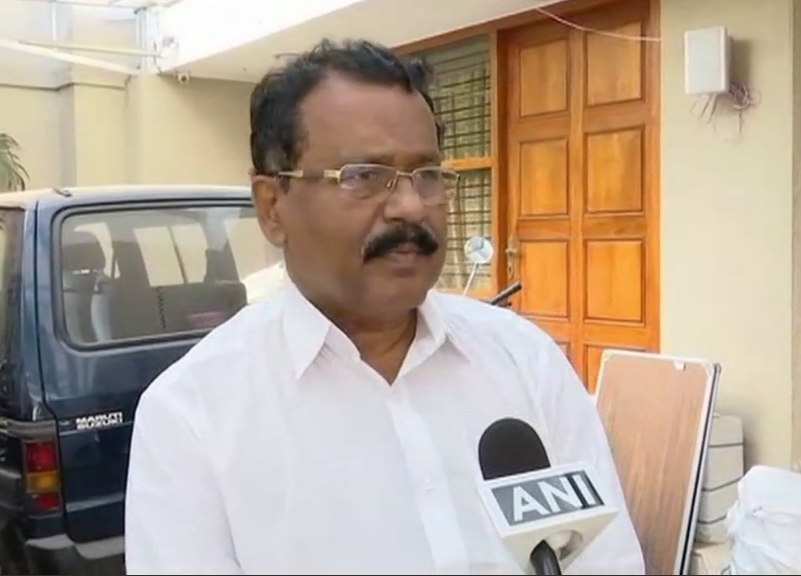 Jan 03, 2019 09:39 (IST)
Security has been deployed in Pathanamthitta because of shutdown called by various organisations. Clashes were reported across the state after the two women activists, escorted by police, entered the Sabarimala temple in a surprise pre-dawn operation on Wednesday.

Kerala: Security deployed in Pathanamthitta in the view of hartal called by various organisations over #SabarimalaTemple women entry pic.twitter.com/Hse169zZLs

Jan 03, 2019 08:58 (IST)
Karnataka State Road Transport Corporation has stopped its bus operations to Kerala for the day in view of the state wide shutdown called by various organisations after two women sneaked into Sabarimala temple yesterday.
Jan 03, 2019 08:41 (IST)
Kerala DGP Loknath Behara has warned of strict action against those indulging in violence during the shutdown.
Jan 03, 2019 08:35 (IST)
Chandran Unnithan, 55, was injured in clashes between CPI(M) and BJP workers in Pandalam . He was a member of a group called Sabarimala Karma Samithi. He was injured on the head in stone-throwing allegedly from the CPI(M) office and died in hospital. Police are investigating the man's death.
Jan 03, 2019 08:23 (IST)
A 12-hour shutdown called by BJP and other parties began today morning after widespread right-wing protests against the entry of two women into the Lord Ayyappa temple in Sabarimala. 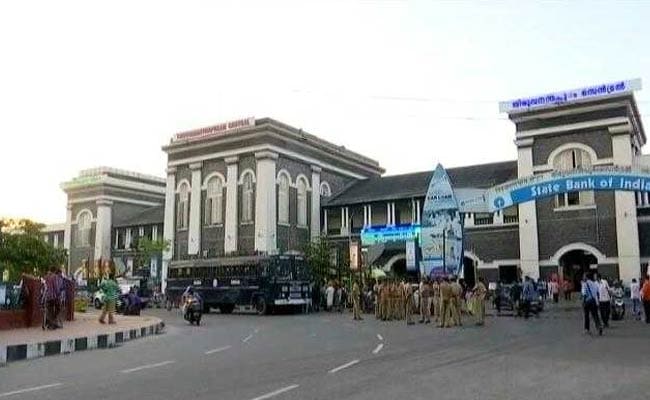 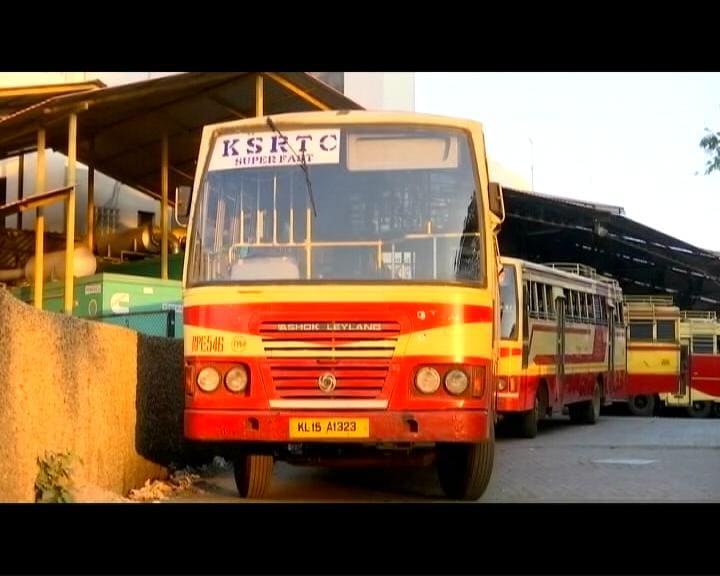 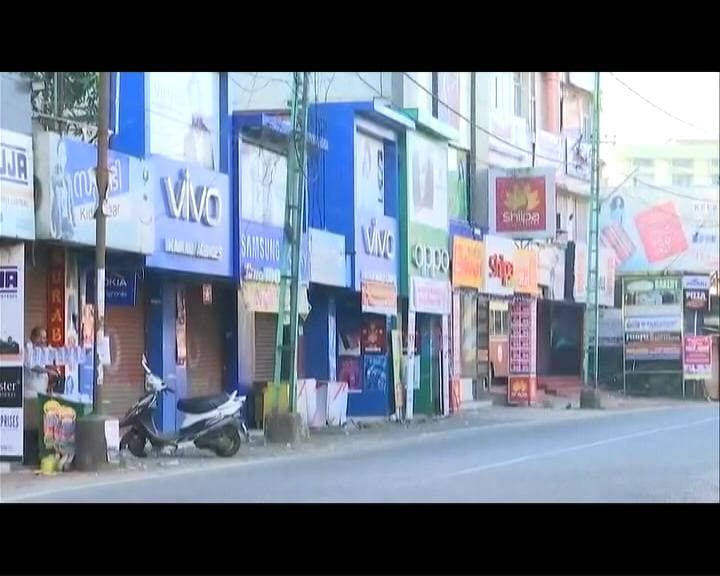 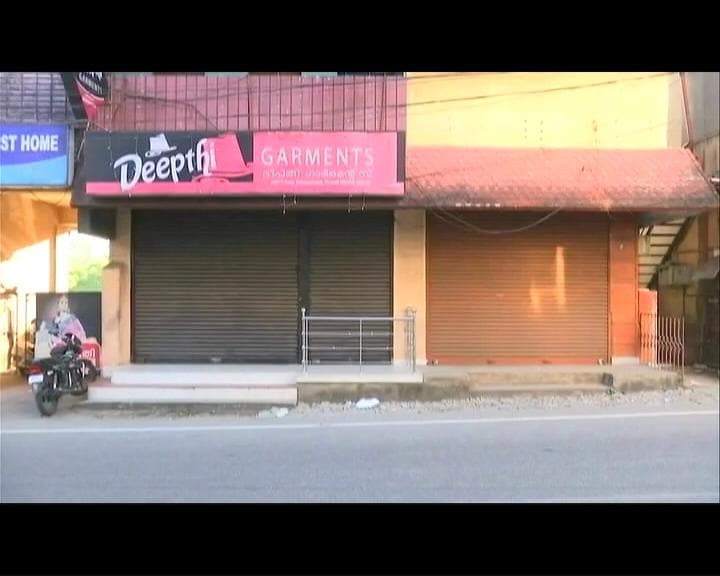