Alert In Kerala, Over 1,300 Moved To Safety As Rain Batters State 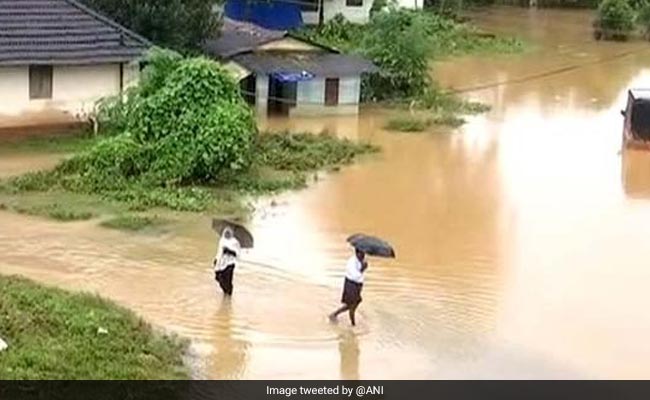 Many places in Malappuram District are under water with some villages being isolated.

A red alert, warning about likelihood of very heavy to extremely heavy rainfall, has been issued for four districts in Kerala where heavy rains, gusty winds and widespread landslips have wreaked havoc in several areas, including tourist destinations of Wayanad and Idukki, after the second spell of the south-west monsoon intensified.

Chief Minister Pinarayi Vijayan has maintained that the state is prepared to tackle the situation.

"Situation is under control. Orders have been given to district Collectors to take all required precautionary measures. People from sensitive or dangerous areas are being asked to move out. People are requested to co-ordinate with the rescue and relief officials," Mr Vijayan said during an emergency meeting in Thiruvananthapuram today.

On Monday, a woman died in Malappuram after a tree uprooted and fell over her house, news agency PTI reported. In Wayanad, a 24-year-old woman was reported dead in her house in Panamaram village in Wayanad, news agency IANS reported.

The state has requested for 10 teams of the National Disaster Response Force to be positioned in the state. Seven of these teams are expected to reach today. One NDRF team has been already positioned in Idukki.

Sixteen relief camps have been set up in Wayanad, the highest in the state, officials said.

Around 1,385 people have been evacuated to relief camps with more than 100 evacuated in Nilambur in Malappuram district alone.

Indian Meteorological Department (IMD) on Wednesday had predicted ''Fairly widespread'' to ''widespread rainfall'' with isolated heavy to very heavy rainfall in the state of Kerala for the next three days.

Over 400 people were killed and lakhs were displaced in the August deluge last year, the worst in 100 years.