The National Medical Commission Bill was tabled in Parliament on Friday that will replace the Medical Council of India, besides allowing practitioners of alternative medicines, such as homoeopathy and ayurveda to practice allopathy after completing a bridge course. 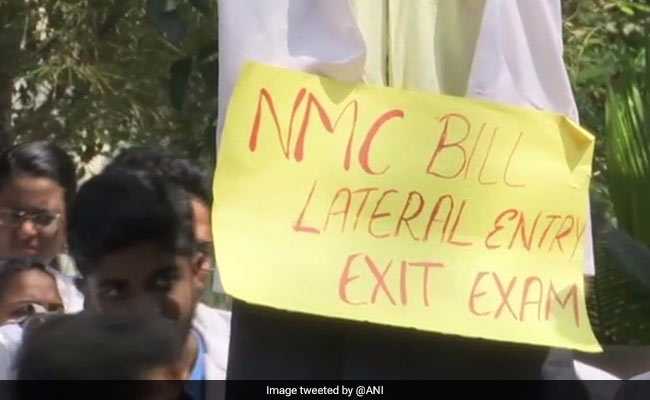 Thiruvananthapuram: The nationwide protest called on Tuesday by the Indian Medical Association (IMA) against a new bill seeking to replace the Medical Council of India (MCI) with a new body left many patients in lurch, as doctors stayed off duty across Kerala.

While the doctors at the state-run medical colleges decided to keep away from the Outpatient Department for an hour from 8-9 a.m. and at the state-run hospitals from 9-10 a.m., in many private hospitals the protests are likely to continue till 6 p.m.

Emergency services have not been affected.

To register their protest against the new bill, more than 3,000 doctors from 14 districts staged a demonstration in front of the Governor's house.

"I was being examined by a doctor and mid way, other doctors came and pulled my doctor away. I am now waiting for the doctor to return. This is very cruel," said a woman at the state-run General Hospital in Thiruvananthpuram.

The National Medical Commission (NMC) Bill was tabled in Parliament on Friday that will replace the MCI, besides allowing practitioners of alternative medicines, such as homoeopathy and ayurveda to practice allopathy after completing a bridge course.

"We have been forced to protest as we have no other option," said state Indian Medical Association Secretary N.Sulphi to the media.

The protests come at a time when the Bill might be taken up for discussion in Parliament, later on Tuesday.
Comments
Indian Medical AssociationNational Medical Council BillMedical Council of India