Suhasini Raj, who is a Delhi-based journalist, along with her colleague, a foreign national, managed to go past the Pamba gateway but was stopped midway by angry Sabarimala devotees.

Two journalists of the New York Times, who were on their way to the Sabarimala temple in Kerala this morning, were forced to abort their trek and turn back following a massive protest by those who are trying to enforce the centuries-old ban on the entry of women of reproductive age in the temple, which was scrapped by the Supreme Court last month.

Delhi-based Suhasini Raj, along with her colleague, a foreign national, managed to go past the Pamba gateway, just before the climb to the hilltop shrine, but was stopped midway by angry protesters who formed a human wall before her.

As she was climbing up, she kept saying that she did not come to pray but to do her work. Police had to throw a security ring around Ms Raj and her colleague as they made their way back.

"I had reached half way and then the protests grew stronger. I was hit by a stone and then we decided to return. The police had provided us all the security," Ms Raj told news agency IANS. 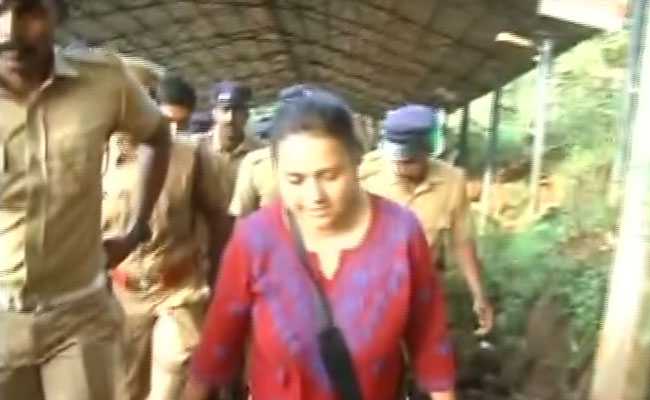 Sabarimala Protests: Suhasini Rah and her colleague were given police protection as they returned.

"It was a massive protest by the devotees. The protesters were sitting on the pathway shouting slogans against her. She had no other way but to return and she did that," said an eyewitness.

Manoj Abraham, Thiruvananthapuram Inspector General of Police (IGP), told news agency ANI that she was "not forced to go back, she went back".

On Wednesday, the protesters, who opposed the entry of women in the 10-50 age group to the Sabarimala temple, clashed with the police and heckled women journalists as the pilgrimage season opened. Protesters combed buses, stopped women from going near the temple, attacked journalists, vandalised media vehicles and threw stones at the police.

The Sabarimala temple opened for the first time last evening after the Supreme Court ruling last month allowing entry of women aged between 10 and 50. Women were banned from the Sabarimala shrine for hundreds of years as devotees believe menstruating women are "impure" and the temple's presiding deity, Ayyappa, is considered to be a celibate. Many take a vow of celibacy for 41 days before beginning a trek through the mountains to the temple.

The district authorities have clamped prohibitory orders banning large gatherings for 24 hours in a 30 square km radius of the temple town and the state is observing a statewide shutdown today called by a Hindu organisation backed by the BJP-led NDA.