Akhil Hindu Parshad said it had destroyed the church set because it was designed on an island in rural Ernakulam, near a Shiva temple. 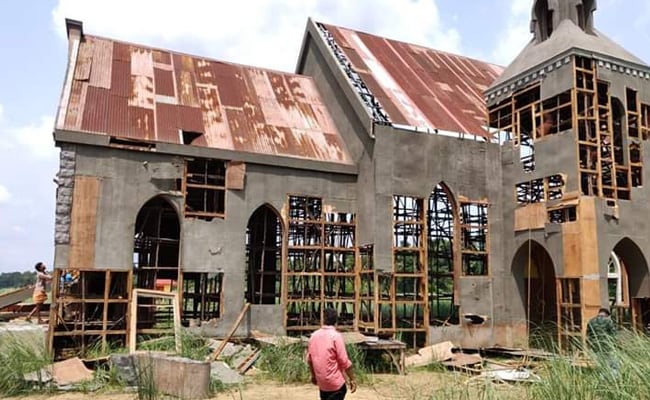 The shooting of the movie Minnal Murali was stopped because of the lockdown.

At a time when Kerala is focussing on all possible measures to contain COVID 19 and restart its economic activities, a group of right wing activists have allegedly demolished a movie set which involved a church set up.

"While a case of rioting and unlawful assembly has been registered against around 15 accused, seven of them have been identified, and are on the run," Perambavoor Police Station officials told NDTV.

The church set was designed on an island in rural Ernakulam, near a Shiva temple. The shooting of the movie Minnal Murali, however, had to be temporarily stopped because of the lockdown. Necessary permissions were taken by the filmmakers to erect the set.

"We had objected to this structure being raised before the Mahadeva temple and said this should not be so. We had also filed complaints. We don't have a habit if pleading. We decided to destroy it. We have to protect our self-respect," General Secretary of Akhil Hindu Parshad Hari Palode, wrote on Facebook, congratulating the activists of right-wing groups who indulged in the demolition.

"We are trying our best to arrest the accused as soon as possible," a police official at Perambavoor Police Station told NDTV.

Popular actor Tovino Thomas, who is acting in Minnal Murali, reacted to the incident in shock on Facebook saying, "It is during this prevailing uncertainty that this contractual set was destroyed by a group of racialists yesterday. The reasons they cite for this unceremonious act are not understood to our senses till now. We've heard of movie sets being vandalised by religious fanatics in northern parts of India. Now, it's happening to us right here. It has caused us a lot of distress, and even more of anxiety. We have decided to go ahead with the legal proceedings."

Chief Minister Pinarayi Vijayan has condemned the attack saying "strict action will be taken against them. Kerala is not a place where fanatics of any kind will be allowed to go scot-free..."