Maradu flats: Massive arrangements have been made for the two-day demolition process that began at 11 am. The first building was razed to the ground in seconds, followed by the demolition of the second apartment complex.

Dramatic scenes unfolded in Kochi this morning as two luxury apartment complexes - overlooking Kerala's stunning backwaters - came crashing down in seconds in a highly controlled demolition process of four apartment complexes. Over 350 flats in the coastal city - that housed 240 families - will be razed to the ground over this weekend as the Kerala government conducts one of the largest demolition drives in India involving residential complexes. The unprecedented exercise comes four months after the Supreme Court ordered the demolition of four residential buildings in a posh lakeside location in the city over violation of coastal regulation norms.

The 19-floor H2O Holy Faith complex of 90 flats in Kochi's Maradu was the first to go down today, collapsing in just a matter of a few seconds. Minutes later, the twin towers of Alfa Serene - separated by a narrow stretch of backwaters - tumbled down with an ear-splitting noise. A thick grey cloud of dust and debris cascaded down as the two residential complexes were demolished. The remaining two complexes will be razed tomorrow. 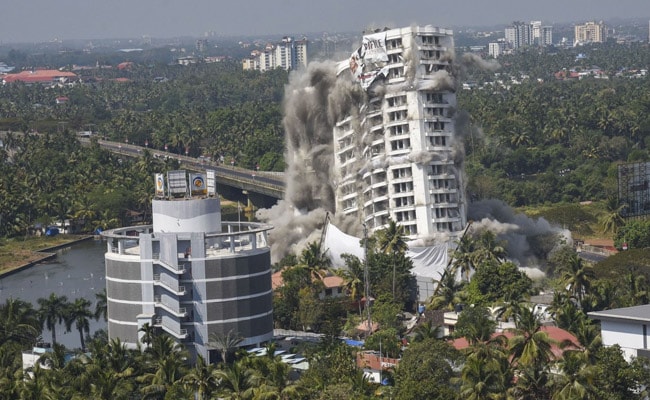 Kochi: Holy Faith H20 in Maradu was the first apartment complex to go down.

Massive arrangements have been made for the two-day demolition process that began a little after 11 am. Hundreds of kilograms of explosives were stacked in the buildings to demolish them in a manner of implosion where the debris fell inwards.

A crowd of onlookers who flocked to nearby terraces and roads watched the demolition, after officials onboard helicopters conducted aerial surveys. 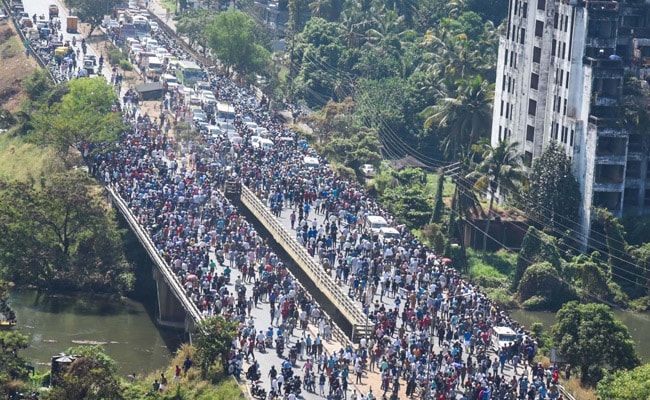 Hundreds of people gathered to watch the buildings being demolished in Kochi's Maradu.

After all the occupants of the apartment complexes moved out, authorities had removed all the windows and other things from the building and all what remains is a skeleton structure.

Shamshudeen Karunagapally, who bought a flat for over Rs 1 crore, said his wife and children did not watch the buildings go down as it was "too painful for them to see their dreams shatter before their eyes". "We are suffering without any fault," he told news agency AFP.

In September last year, the Supreme Court had ordered the demolition of the four buildings in Maradu for violating the Coastal Regulation Zone rules. The top court gave 138 days for the demolition, a timeline set by the Kerala government.

The court also had ordered payment of a compensation of Rs 25 lakh each to those who lost their homes.