Quick coordination helped the family get an air ambulance, which took her to the Trivandrum Medical College Hospital within minutes. 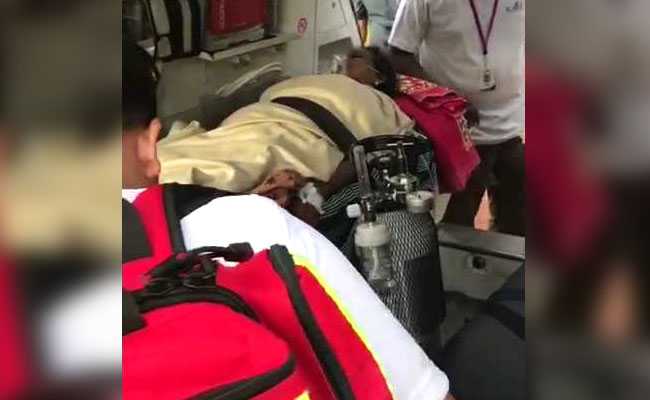 The flood waters are yet to recede in Chengannur and homes are still unfit for living.

Fifty-year-old Thangamma got a new lease of life after she was rescued and transferred to the hospital, within minutes of suffering a massive heart attack on Thursday at Chengannur in Allepy, one of the worst-hit districts in Kerala. Quick coordination helped the family get an air ambulance, which took her to the Trivandrum Medical College Hospital within minutes. The flood waters are yet to recede in Chengannur and homes are still unfit for living.

After Thangamma was taken to the local government hospital, doctors immediately got in touch with a non-profit group, who sent a chopper and medical help. In flat four minutes, she was transferred to the helipad, where an air ambulance was waiting.

The district medical officer played a crucial role and coordinated with Chief Minister Pinarayi Vijayan's office and got permission to use the defence helipad that the Navy and Air Force rescue teams were using to transfer her. "We were very lucky that the chief minister's office coordinated and got permission. Thangamma is stable now," said Dr Radhakrishnan, the district medical officer.

Doctors from the International Critical Care Air Transfer Team (ICATT) have offered free services for the flood-hit people in Kerala, with the support from a non-profit group. Dr Shalini Nalwar of ICATT told NDTV, "We are trained in rescuing people in disaster-struck areas. We carry ICU kits with us and that makes a huge difference in tackling critical patients difficult situations."

Chief Minister Pinarayi Vijayan, who visited the relief camps in the badly-hit Alappuzha, Chengannur, Ernakulam, Pathanamthitta and Thrissur on Thursday said his government's focus is now on rehabilitation of the affected people and rebuilding the state.

After the floodwaters started receding, nearly five lakh people have gone back to their houses over the past few days. However, people who have returned to their homes face the gigantic task of cleaning their houses as it is filled with slush and poisonous snakes like cobras and vipers. Over 10.4 lakh people had to move to relief camps during the floods in Kerala, which received the heaviest rainfall since 1924.