In Kerala, Special Offer On Air Guns To Deal With Stray Dogs

In Kerala's Kottayam, a group had killed eight stray dogs and hung them upside down to poles last week

Kochi: In Kerala, if you are up for killing stray dogs or have a case against you for eliminating one, you may end up getting air guns on discounted rates, a group has offered as the war on dogs has claimed lives of over 30 strays in the state's Ernakulam and Kottayam districts last week.

A poster by St Thomas College Old Students Association in Pala announces a discount of 10 per cent on air guns to those facing difficulties due to stray dogs and 25 per cent to those who have at least one police case against them while dealing with strays.

And the group has presented their first gun to Jose Maveli, who heads Stray Dog Eradication Group and was arrested for killing many strays in the past. Mr Maveli, who runs a shelter home for street children in Ernakulam, is out on bail but claims he is "not a killer".

"I am a human being. People approach me and I give them the numbers of various dog catchers who can help them," he told NDTV. 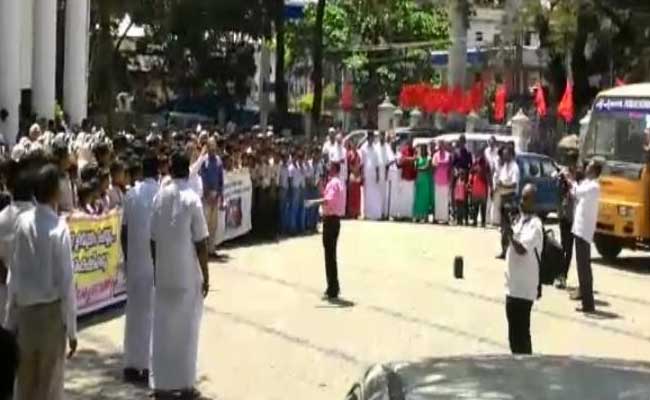 Contrary to his claims, animal rights activists have alleged that Mr Mavelli has been instrumental in killing stray dogs. In Kochi, a video has been released in which Mr Maveli seen leading schoolchildren in a pledge encouraging them to eradicate stray dogs from Kerala.

"God give us the courage and strength to eliminate stray dogs from Kerala. Stray dogs are dangerous...," the video shows schoolchildren repeating pledge after Jose Maveli.

At the same gathering, organised to help people involved in the stray dog movement, a businessman, Kochouseph Chittilapilly ridiculed the Kerala's top cop for taking action against dog killers.

"Police need to protect people. We don't want a non-malayalee DGP who is enacting a comedy by taking action against people who have killed stray dogs", he said.

James Pambakkal, a former teacher who is also part of the organisation offering guns told NDTV, "We have no business interest in this matter. Unfortunately, some authorities are more interested in protecting stray dogs than human beings and that's why we came up with this plan."

Appalled by the organisation's comments, activist Sumita Susheelan said, "Is this now a terrorist state? Just few days back the Supreme Court of India slammed the Kerala government saying 'are you celebrating the killing of dogs?'."

Promoted
Listen to the latest songs, only on JioSaavn.com
Last week in Kalady panchayat, 24 stray dogs were killed, who said the killing will continue as long as dog bites do. In Kottayam, a group of political leaders had killed eight stray dogs and hung them upside down to poles while staging a protest.