Thushar Vellapally, who unsuccessfully contested as the NDA candidate against Congress leader Rahul Gandhi in the 2019 general elections from Wayanad, was arrested on August 20 at a hotel in Ajman in connection with Rs 19 crore cheque default case. 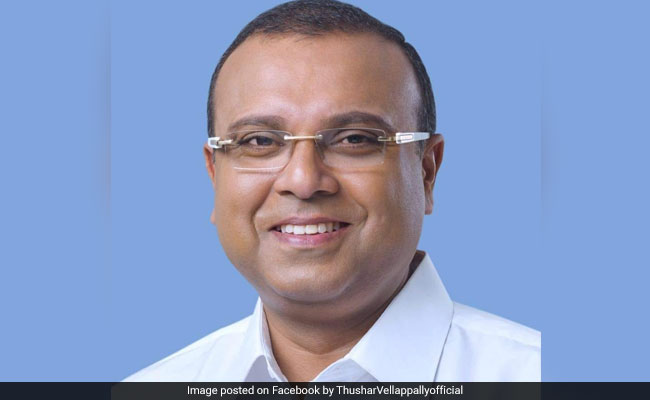 Thushar Vellapally had earlier asserted that charges levelled against him were false.

Thushar Vellapally, President of a coalition partner of the BJP-led NDA in Kerala, who was arrested last month in the UAE in connection with a Rs 19 crore cheque default case, has been cleared of all charges in the case by a UAE court, the leader himself said on Sunday.

Thushar Vellapally, who unsuccessfully contested as the NDA candidate against Congress leader Rahul Gandhi in the 2019 general elections from Wayanad, was arrested on August 20 at a hotel in Ajman in connection with Rs 19 crore cheque default case.

He was released on bail by Ajman Public Prosecution, but was not allowed to travel to India without clearing a civil case.

On Sunday, Thushar Vellapally, chief of Bharath Dharma Jana Sena which is a partner of the BJP-led NDA in the state, told media here that he has been cleared of all charges by a court in Ajman. He called it the "victory of justice".

The Ajman court in the UAE quashed the criminal proceedings against him citing lack of evidence, the party sources said.

The court has said the evidence submitted by the complainant in the case, N Abdullah who worked for Thushar Vellapally-owned Boeing Construction Company LLC that is now defunct, lacks credibility and raised doubts on the veracity of the documents filed.

The arrest was based on a complaint from Abdullah, a Thrissur native in 2009, when Thushar Vellapally was running a construction business in Ajman.

He alleged that Thushar Vellapally had issued a cheque of Dh 10 million (around Rs 19 crore) ten years ago that had bounced.

The court has also agreed to release the passport of Vellappally, which it had withheld after the case was registered, the party sources said.

He is expected to remain in the UAE for a couple of days to meet the complainant in the case.

The BJP in Kerala on Sunday welcomed the quashing of a cheque bounce case against the NDA state convener, terming his release as the "victory of truth".

"This is the victory of truth. It''s highly deplorable, the tendency to trap the politicians in fake cases and tarnish their image," BJP state chief P S Sreedharan Pillai said in a statement in Thiruvananthapuram.

Thushar Vellapally is also the Vice President of the Sree Narayana Dharma Paripalana Yogam, a prominent organisation of the backward Ezhava community in Kerala.