Kerala floods: The rescue operation team in Wayanad have been evacuating senior citizens, women, children, and others by carrying them on their shoulders or palanquins. 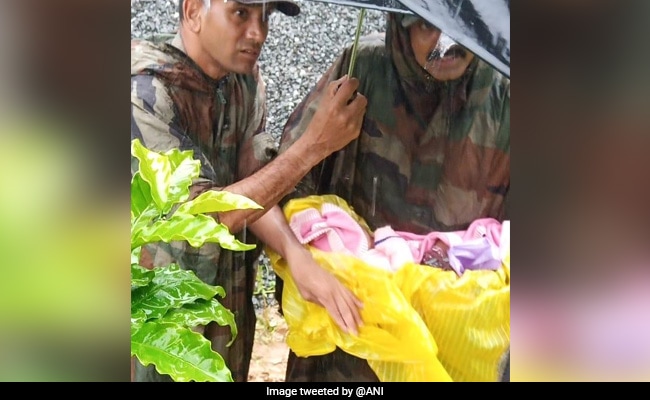 Kerala floods: Around 6,000 persons have been rescued, more than 15,000 have been evacuated.

A newborn was rescued by the Army today morning as heavy rain continues to hammer Kerala, triggering floods.

The rescue operation teams were seen evacuating senior citizens, women, children, and others by carrying them on their shoulders or palanquins, trying hard to wade through the debris of landslides and flood water.

As many as 24 relief camps have started functioning in the state. Over eight Engineer Task Forces (ETFs) have been deployed in various districts like Alappuzha, Ernakulam, Pathanamthitta, Idukki, Malappuram, Wayanad, Kannur and Kozhikode.

Working in coordination with Navy and Air Force, the Army has intensified the relief and rescue operations by deploying 123 rescue teams in 16 flood-affected districts spread across four affected states -- Maharashtra, Karnataka, Kerala, and Tamil Nadu.

According to the Army, around 6,000 persons have been rescued and more than 15,000 have been evacuated from the flood-affected states till now. Food and medical aids have also been provided to the victims.

Around six relief teams have also been deployed in Nilgiri district of Tamil Nadu.