Arif Mohammad Khan replaces P Sathasivam, a former Chief Justice of India, who demitted office after the end of his five-year term and returned to his hometown Erode in Tamil Nadu. 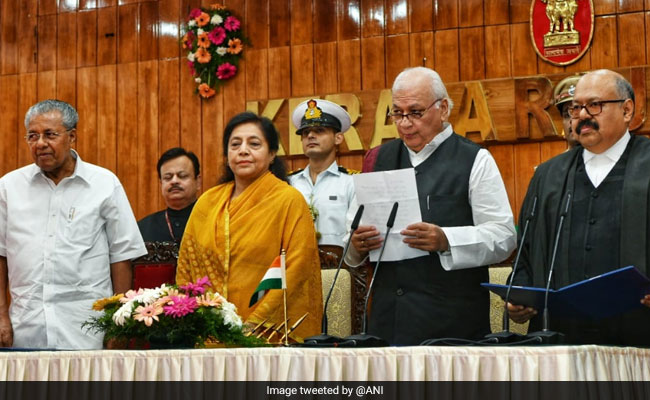 Former Union minister and veteran politician Arif Mohammad Khan was sworn in as the 24th Governor of Kerala on Friday.

Chief Justice of the Kerala High Court Hrishikesh Roy administered Mr Khan the oath of office at the Raj Bhawan in Thiruvananthapuram. He took the oath first in Malayalam.

Kerala Chief Minister Pinarayi Vijayan, his Cabinet colleagues and other top officials were present at the occasion.

Mr Khan, 68, arrived in Thiruvananthapuram on Thursday, and was given a guard of honour at the airport.

Mr Khan replaces P Sathasivam, a former Chief Justice of India, who left office after the end of his five-year term and returned to his hometown Erode in Tamil Nadu.

A resident of Uttar Pradesh, Governor Khan entered politics as a student leader at the age of 26. He has been a member of the Uttar Pradesh Legislative Assembly and as well as the Lok Sabha and served as a Union minister in the Cabinets of former prime ministers Rajiv Gandhi and VP Singh.