"Will Get Final List From Amit Bhai": BS Yediyurappa On Karnataka Cabinet

The Karnataka cabinet expansion will take place on Tuesday afternoon, over three weeks after party leader BS Yediyurappa was sworn in as the Chief Minister 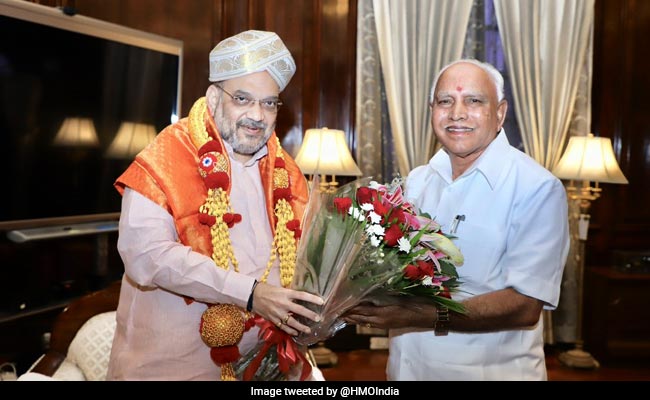 Karnataka Chief Minister BS Yediyurappa will finally get a cabinet, over three weeks after he was sworn in following the fall of the previous Congress-Janata Dal Secular coalition government.

Ministers will be sworn in on Tuesday morning after Mr Yediyurappa had his party leadership in Delhi sign off on his picks for the cabinet. The BJP government has been busy tackling the flood crisis for a major part of the last week.

"Within two-three hours, I am going to get the final list from Amit bhai. So, cabinet expansion will be done tomorrow," Mr Yediyurappa told news agency ANI, referring to Home Minister Amit Shah, the BJP president.

The Chief Minister had travelled to Delhi even two weeks ago, to get his bosses to give him the go-ahead. But Amit Shah reportedly asked him to double back to Karnataka to oversee relief and rescue operations in his state after floods that have led to over 60 deaths and massive devastation.

The delay in cabinet formation provoked criticism from the opposition Congress and JDS, which lost a trust vote in July; their year-old coalition government collapsed after multiple resignations plunged it into a minority.

"Is this what BJP means by 'Minimum Government'? A cabinet without cabinet ministers? Will @BSYBJP wake up & stop our state being mocked across the country," the Congress had tweeted. "Karnataka needs a government. If @BSYBJP can't form one, he should step down," it had said.

The opposition has also tweeted on the absence of a cabinet at a time when Karnataka is facing a huge flood crisis.

Several MLAs of the Congress and JDS were disqualified from the assembly by the then Speaker and expelled from their respective parties after they quit, causing the fall of the coalition government. They have appealed to the Supreme Court against their disqualification and some posts may be kept vacant as a reward for them, should they win that appeal.