Karnataka rain: A video shot by a Kodagu resident shows a house crumbling under its own weight and falling on its side

Heavy rain in six districts in Karnataka has led to floods and landslides in the southern state. The state government has announced a Rs 200 crore relief fund for the affected districts. One of the worst-hit is Kodagu, a district in south-western Karnataka known for its coffee plantations and small waterfalls that draw a lot of tourists.

Residents of Kodagu, 260 km from Bengaluru, have been posting updates on the rain situation on social media. All roads leading to Kodagu are blocked due to multiple landslides, PRS Chetan, member of the civil defence quick reaction team, told news agency ANI. The main Kodagu-Kushalnagar is inaccessible due to landslides, he added.

One of the videos shot by a Kodagu resident shows a house slipping toward a deep fall in the back of the building.

The two-storey house is fairly big and stands on higher ground; half of the building juts out to a steep cliff-like face of muddy soil, made more slippery by rainwater. 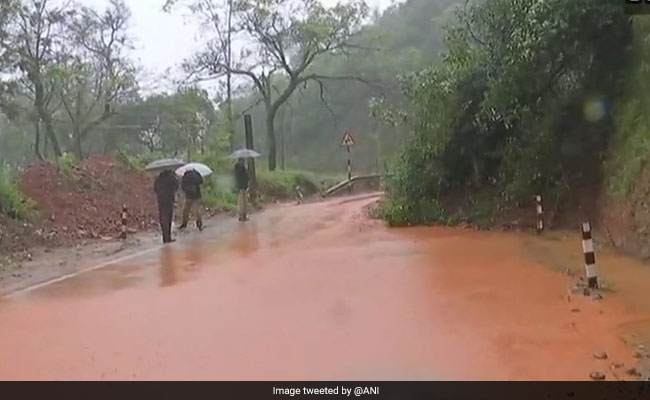 The building begins to slide toward the rear and within seconds the entire structure falls on the muddy ground below. A few people who were standing in front of the building run for safety to the side.

Two-hundred relief camps have been set up and over 20,000 people have taken shelter in them, people familiar with the matter said. Fourteen people have died and one is missing due to heavy rain and floods -- 10 died in Wayanad, two in Kodagu, and one each in Udupi and Shivamoga.

The gates of two dams in Karnataka have been opened. People have been asked to move to safer areas as the water released from the dams could affect them. Landslides continue to happen across the rain-hit districts.