The Home Minister's remarks that the gang-rape survivor and her male friend should not have gone to the deserted place evoked sharp reactions. 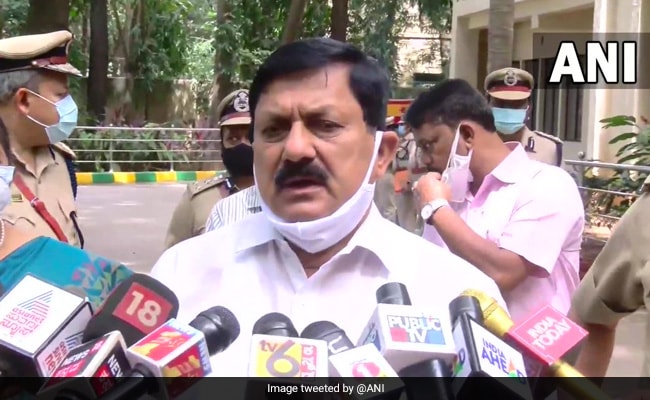 Karnataka Home Minister Araga Jnanendra on Thursday kicked up a row over his rape comments made in the context of a gangrape incident in Mysuru, that did not go down well with Chief Minister Basavaraj Bommai and opposition Congress, prompting him to withdraw his controversial statement.

The Home Minister's remarks that the gang-rape survivor and her male friend should not have gone to the deserted place and his claims that the opposition Congress was trying to ''rape'' him by targetting him, following the incident, evoked sharp reactions from the opposition party, even as Mr Jnanendra accused it of trying to derive political mileage from the ''inhuman'' incident. Hitting out at the Home Minister and the ruling BJP, the Congress said they are "incapable" of protecting the people of the state.

With the issue snowballing into a major controversy and the Chief Minister also disapproving of his comments, Mr Jnanendra withdrew his statement.

Meanwhile, the Chief Minister said his government will form a special team to investigate the gang-rape case and asserted that the perpetrators will be caught soon and brought to justice. Mr Bommai also disapproved of the comments made by Jnanendra and said, "I just don't agree with the comments made by my Home Minister regarding the gang-rape incident. I have advised him to give a clarification."

"I have directed the officials to pursue the matter seriously and update me on the developments," he added.

"Once the DGP (Director General of Police) and I reach Bengaluru, we will immediately form a special team," Bommai, who was on a two-day visit to the national capital, told PTI.

A college girl was allegedly gang-raped near Chamundi Hills in Mysuru late on Tuesday and the incident came to light on Wednesday.

The girl and her male friend, who was assaulted by the gang, are undergoing treatment in a private hospital.

Speaking to reporters, he said there are concerns about lack of police patrolling in such places and that he was going to Mysuru and hold discussions with officials to rectify the lapses.

"When such incidents happen, instead of exerting pressure to see it from a humanitarian perspective and detect (the culprits), attempts are on to derive political mileage in such a situation. People will see it. I will not say much on this. Instructions have been given on what has to be done by the police so that such things don't recur and we are at it," he said.

"He (Home Minister) has claimed that Congress was raping him. He is using the word rape very lightly...it seems he likes that word. I seek the response of BJP leaders on this statement. When the Home Minister is saying that Congress is raping him, what is the administration of the state doing?" he asked.

Targeting Mr Jnanendra for his comment that the victim should not have gone to deserted place, the Congress party said, "Home Minister you have the onus of protecting the state. Are you not ashamed of making such a shabby remark?"

"With this statement he (Home Minister) has agreed that it is dangerous to venture out even at 7:30 pm under a BJP rule," it said.

Pointing out that it has been nearly 48 hours since the incident occurred and no arrest has been made, Mr Shivakumar said it is a shame on the police department and the party was concerned about the image of Karnataka.

He said Congress is constituting a fact finding committee to look into the incident under the Chairmanship of former MP V Ugrappa. They would visit Mysuru and submit a report and the party will do everything possible to get justice for the victim.

Later, in a statement withdrawing his comments, the Home Minister clarified that he had no intention of hurting anybody in criticising the Congress leaders who had sought his resignation over the unfortunate incident in Mysuru.

"I have withdrawn the statement made earlier on the Congress party leaders," he said.

Referring to the rape incident, Mr Jnanendra said police officials are conducting an investigation to nab the culprits.

He said the victim and her male friend are being treated in the hospital and are under medical care.

The Minister also said that security measures will be tightened further to ensure the protection of all, especially women, adding that "We are committed to ensure the safety of all sections in society."

Meanwhile, Mysuru police have intensified efforts to identify the culprits with the help of mobile phone numbers that operated in the area at the time of the crime, and are also looking into CCTV footage of nearby areas, official sources close to PTI said.

They said the culprits allegedly made a video of the sexual assault and demanded money for not making it public.

Some student organisations staged protests in Mysuru, demanding justice for the victim.