Major Fire Breaks Out At Bandipur Tiger Reserve In Karnataka

Bandipur Tiger Reserve Fire: The fire was reported around 4 am on Saturday morning. Even till 4 pm the fire couldn't be doused off completely.

The Bandipur Tiger Reserve is in Chamarajanagar district of Karnataka.

A major fire broke out in the forest area of the Bandipur Tiger Reserve in Karnataka on Saturday. It has reportedly destroyed over 150 acres of the forest.

The fire was reported around 4 am on Saturday morning. The fire couldn't be doused off completely till the last reports.

Huge plumes of thick black smoke covering the air were seen in videos. Fire department officials along with policemen are trying to prevent the fire from spreading with the help of local residents.

Noted environmental activist Joseph Hoover told NDTV, "Neither the pre-season burning nor the annual assessment meeting of officials took place this year to take stock of the situation in order to fight fire of this devastating scale."

The pre-season burning of dead leaves and branches is a common practice to reduce chances of spreading fire. 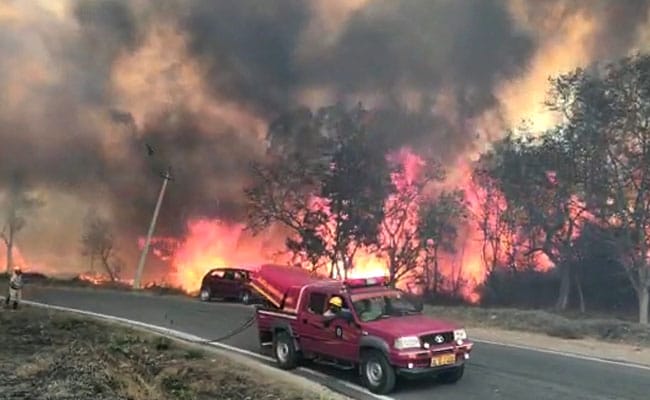 Huge plumes of thick black smoke covering the air were seen in videos.

The Post of the Director of Bandipur Forest is also lying vacant for almost three months. It is alleged that number of human fire watchers were not hired this year in the region. People from nearby villages are hired by the Forest Department and paid Rs 320 per day for the job.

A fire also broke out near the Mudumalai Tiger Reserve (MTR) in The Nilgiris District in Tamil Nadu. There was no immediate information about loss of wildlife which is 2 km away from MTR and bordering Bandipur.

With high velocity winds and dry grass in the area, more than 90 forest personnel of both Karnataka and Tamil Nadu were involved in the fire fighting operation, reported news agency PTI.