After arriving in Bengaluru, BJP general secretary Arun Singh said the B S Yediyurappa government has led the fight against Covid from the front. 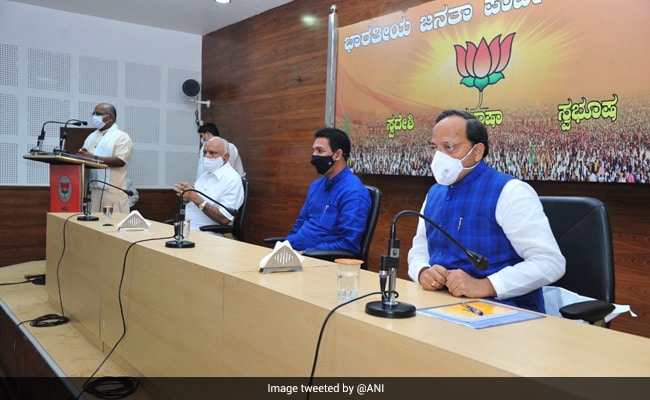 BJP national secretary and Karnataka in-charge Arun Singh is on a three-day visit to the state.

The BJP's national secretary and Karnataka in-charge Arun Singh reached Bengaluru today amid signs of unease within the ruling party and asserted that all party legislators and ministers are united and there is no difference whatsoever.

Speaking to the media after arriving in the city, Mr Singh said the B S Yediyurappa government has led the fight against Covid from the front and added that good work is happening under his leadership.

He said his three-day visit is aimed at reviewing the party's political activities and organisation-related work in the state and that he will also assess Covid relief work by party workers and review arrangements for International Yoga Day.

"The state government, the Chief Minister and ministers have worked tirelessly to serve the people during Covid. The announcement of Rs 1 lakh as compensation for (BPL families) for Covid deaths is a first in the country," he said.

Targeting opposition parties, he said, "During the pandemic, the Congress only made allegations, but did not work on the ground. The JDS was in quarantine. Only the Yediyurappa governments, its ministers and BJP functionaries could be seen on the ground."

Responding to a question on party legislators complaining about the Chief Minister, Mr Singh said, "All functionaries, ministers and MLAs of our party are united. There is no difference of any kind."

He said he will speak to legislators individually and that they should give statements to the media, and asked them to focus on working in their areas.

Several BJP leaders have spoken out against the Chief Minister. Among them is state Rural Development Minister K S Eshwarappa. In March this year, Mr Eshwarappa wrote to the Governor Vajubhai Vala, alleging that the Chief Minister was interfering in the functioning of his ministry. In the letter, alo marked to Prime Minister Narendra Modi, Union Home Minister Amit Shah and BJP president J P Nadda, the minister accused Mr Yediyurappa of bypassing him to make allocations worth Rs 774 crore from his department.

Ahead of the BJP state in-charge's visit, Mr Eshwarappa said, "He (Arun Singh) is a national leader. He will listen to everybody and take a decision. Whatever decision the national leader takes.... workers are disciplined soldiers of the party."

Asked if his position was secure, the Chief Minister has said he would step down if the central leadership asked him to.

S Muniswamy, BJP MP from Kolar, said the Chief Minister's "chair is not empty" and added that "it would not be sensible to change the CM during this Covid time".