Karnataka Students Made To Wear Cartons To Stop Them From Cheating

Justifying the action, College head MB Satish told reporters that a college in Bihar had used a similar method to curb cheating during exams. 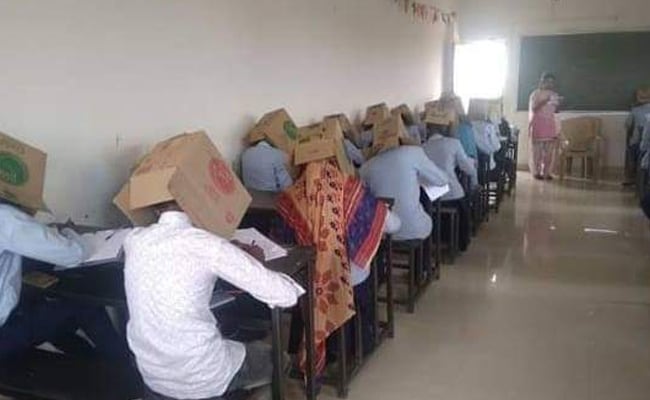 Students seen wearing cardboards on heads at a private college in Karnataka.

In a bizarre incident, students at a private college in Karnataka were made to wear cartons during an exam to stop them from cheating.

The pictures of students of Bhagat Pre-University College in Haveri, about 330 km from Bengaluru, are being widely circulated on social media where they are seen sitting in a classroom, wearing cardboard boxes.

The students were writing papers as part of their mid-term exams. Invigilators can also be seen in the visuals, monitoring the students.

The institute has drawn criticism on social media with many questioning if the measure could really be a deterrent.

On Friday, Karnataka Education Minister S Suresh Kumar reacted to the media reports, saying that the incident was "totally unacceptable". "This is totally unacceptable. Nobody has any right to treat anybody more so students like animals. This pervertion will be dealt with aptly," he tweeted.

Many on social media echoed the views of the state education minister. "This is ridiculous and humiliating for the students. Yes, cheating is a problem, but this is not the way to solve it. Whoever approved this should be reprimanded," wrote a user.

Justifying the action, College head MB Satish told reporters that a college in Bihar had used a similar method to curb cheating during exams and was widely appreciated on social media.

"We tried to do this for the betterment of students. We don't want students' mind to be diverted... the front side of the boxes was open. This was our new experiment. We have received both positive and negative feedback," he said.

Speaking to NDTV,  a senior officer of the Deputy Director of Public Instruction said that an inquiry has been ordered into the incident, which happened on October 16.

"I had personally visited the College while the exam was going on and I made them remove those cardboard Head Covers and have not only served notice to the College but have asked the Director Education to  inquire. We will take action once the Inquiry is completed. Meanwhile, we  have asked students not to follow such instructions if given by the college management," SI Peerzaada said.