Anger also flared over the death of a VHP worker during a bandh on the issue called by the BJP in Kodagu district on Tuesday.

Bengaluru: The Congress state government in Karnataka knew that its decision to celebrate Tipu Sultan's birthday would have its detractors, but perhaps it is getting more criticism than it bargained for.

Protests continued in Bengaluru over the issue - and the main target was Jnanpith awardee, Girish Karnad.

Mr Karnad's admiration of Tipu Sultan - and his suggestion that Bengaluru's airport be named after Tipu instead of city founder Kempe Gowda - upset right-wing groups. The noted playwright later south to end the controversy, saying, ""If anybody has been hurt by my remarks, I apologise... what will I gain by doing it (by giving such comments)."

Basavaraj, state organisation secretary of the Vishva Hindu Parishad or VHP was part of a protest at the Town Hall. "Kempegowda is the nadaprabhu (ruler of the land) of Karnataka. He has insulted our nadaprabhu. We are condemning Girish Karnad. He is not a writer, he is only Siddaramaiah's man."

Anger also flared over the death of a VHP worker during a bandh on the issue called by the BJP in Kodagu district on Tuesday. The police say he fell accidentally to his death while running from a lathi charge. 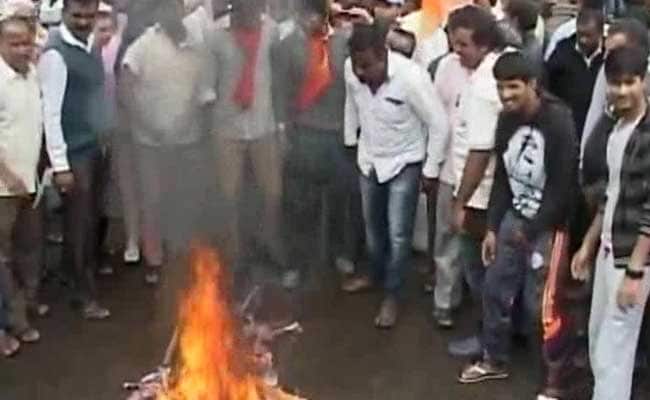 R Ashok, BJP leader and former home minister told NDTV, "100 per cent it is a murder. They made this murder. It is purely communal clashes - the failure of the government, no security arrangements no intelligence. It is a pre-planned murder. BJP is demanding a CBI enquiry or the judicial enquiry."

But Chief Minister Siddaramaiah ruled out such a probe. He said, "There is no need for a judicial inquiry. I have already ordered inquiry into the incident by regional commissioner of Mysore region. Already there is a government order to give Rs 5 lakh for any person who dies in a communal clash. Tipu Sultan is a patriot, freedom fighter - and he is most secular man. That is why I have celebrated."