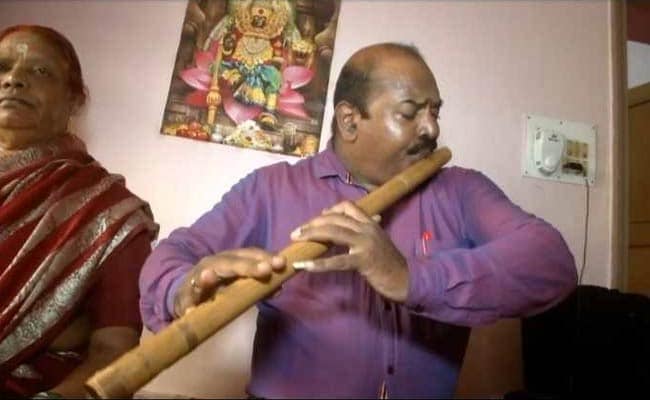 Chandrakant S Hutagi turned his fiber baton into a flute to fulfil a hobby.

A constable posted at the Hubli Rural police station has converted his fibre baton into a flute, through which he belts out melodies during his time off from duty.

"Playing the flute has been my hobby ever since I was in high school. However, due to long working hours, I could not manage time to play the flute at home. So, I decided to do something with the ''Lathi'' and made a flute out of it," Hutagi told ANI.

A video of Hutagi playing the flute was shared on social media by IPS officer Bhaskar Rao, the Additional Director General of Police, Bengaluru.

"Chandrakant Hutgi, Head Constable from Hubli Rural Police station has converted his Deadly Fiber Lathi into a Musical Instrument... we are proud of him..." tweeted Mr Rao. The video has been shared widely on Twitter.

"I was deployed for seven days at Datta Peeta in Chikkamagaluru. We used to be called for duty hours before the actual time of the event. I used to be tensed. So, I did this. Everyone in my department is happy. Now I use the baton for both purposes - maintaining law and order as well as playing the flute," Head Constable Hutagi said.

Apart from sharing the video of the flute playing constable, the IPS officer Rao has also posted several instances of achievements and contributions to society by people in khaki as well as lay people. Among the videos shared by him include a heartwarming one of the CRPF personnel who survived the Pulwama attack, feeding his lunch to a differently-abled Kashmiri boy in Srinagar.

Testing Remains A Challenge In Karnataka Amid A Second Covid Wave