Karnataka Dalit Family: After the incidenttook place, about 530 km from state capital Bengaluru, the Dalit man reportedly reached a nearby police station to file a complaint. 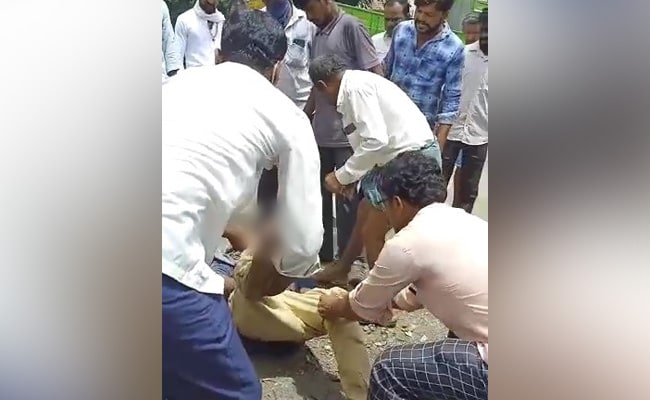 An angry crowd is seen thrashing a man with sticks and shoes after he is pinned to the ground in a video from Karnataka's Vijayapura district. The man - a Dalit- told the police that he was stripped on Saturday and thrashed with his family after he "had touched a bike of a man who belonged to the upper caste". A counter case was filed today that said the crowd was angry because the 32-year-old Dalit man "took off his clothes and made obscene gestures when two girls at the site were washing clothes".

The Dalit man reached a nearby police station to file a complaint after he was beaten with his family on Saturday. The incident took place in a village, about 530 km from state capital Bengaluru.

"An atrocity case was reported in Talikote on Saturday about assault on the Dalit man from Minaji village. It was alleged that when he accidentally touched the bike of a man who belonged to the upper caste, he and his family members were assaulted by around 13 men," said senior police officer Anupam Aggarwal.

"When an investigation team reached the site of the incident today, they were told that the 32-year-old was beaten up when he took off his clothes and started showing his private parts to two girls who were washing clothes. We have registered a counter case under section 354 of the IPC," Mr Aggarwal added.

The clip, which has surfaced at a time when people have been asked to ensure social distancing over coronavirus, shows the crowd of men - standing very close to each other - raining blows on the family. While most of the people seen in the clip are not wearing masks, some of them are seen holding the Dalit man as others beat him.

The fourth worst-hit state in the country by the pandemic, Karnataka on Sunday reported its biggest single-day spike in cases as 4,000 new infections took the state's tally to 63,772 total cases.