FIRs have been registered against Congress' state president DK Shivakumar, Siddaramaiah, DK Suresh and several other prominent party leaders and personalities at Sathanur police station for defying restrictions on Sunday. 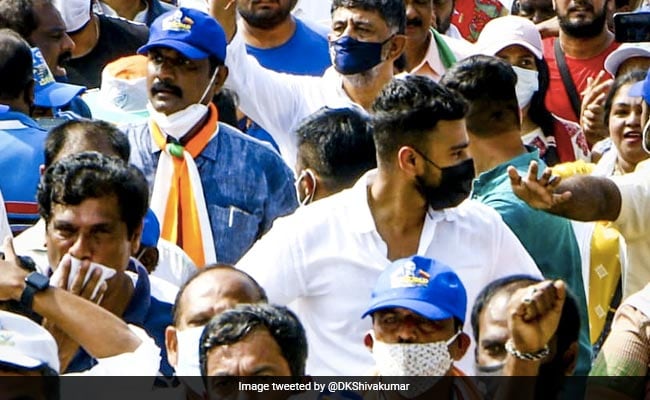 Karnataka Chief Minister Basavaraj Bommai anybody who violates the law will face action.

Karnataka Congress' 'padayatra' (march), demanding implementation of the Mekedatu project across the Cauvery river continued on the second day on Monday, even as FIRs have been registered against nearly 30 of its leaders and others for taking part in it, defying COVID-19 curbs.

According to official sources, FIRs have been registered against Congress' state president D K Shivakumar, Leader of Opposition in the State Assembly Siddaramaiah, Bengaluru Rural MP D K Suresh and several other prominent party leaders and personalities at Sathanur police station for defying restrictions on Sunday.

They said, cases have been registered for violation of COVID rules and prohibitory orders, under the Disaster Management act and sections of IPC.

However, Congress leaders and workers are continuing their march for the second day today, and are scheduled to cover a distance of about 15 km from Shivakumar's native Doddalahalli to Kanakapura.

The government has imposed curfew on weekends and restricted public gatherings to fight the surge in COVID-19 cases, till January 19. It has also prohibited all rallies, dharnas and protests, among others, as part of containment measures.

Chief Minister Basavaraj Bommai, hitting out at Congress leaders for continuing their march said, the law will take its course against the organisers and important people who have violated the rules.

Speaking to reporters, he said, anybody who violates the law will face action.

"Further action will automatically follow with the case registered. Whatever action should be taken under particular sections, will be taken, it will definitely happen and there will be no differentiation in it. How much ever big a leader or a common man, the person involved is, action will be taken in accordance with law," he added.

The 10 days padayatra with the theme 'Namma Neeru Namma Hakku' (Our water, Our right) that began at Sangama, the confluence of Cauvery and Arkavathi rivers at Kanakapura in Ramanagara district on Sunday under the leadership of Mr Shivakumar and Mr Siddaramaiah, will be spanning a distance of nearly 139 km.

However Mr Siddaramaiah, who returned to city from the padayatra last evening due to fever, is not taking part today too, and is taking rest on doctor's advice. According to his office, he is likely to participate in the march from Tuesday.

Stating that according to his information FIRs have been registered on Sunday against about 30 leaders who participated in the padayatra and violated rules, Home Minister Araga Jnanendra said, today also there are violations and more cases may be registered.

"Everything is left to the Ramanagara district administration, if there is any violation, whether by Congress people or anyone else action will be taken," he said.

Asked whether the police and government who take action on common people are feeling helpless in acting against politicians, the Minister said, definitely the government is not helpless.

To a question why didn't the government act to stop the march, despite knowing about the large gathering of people much in advance, Mr Jnanendra said, "we felt that as a responsible political party the Congress, may take a decision in the interest of the people at the last moment, but they did not, and are adamant on going ahead with the march." Noting that stopping padayatra is not a big thing with the police force available, he said, to avoid any untoward incident there, the government decided to act smoothly in the interest of the people, and accused the Congress of playing politics during the coronavirus pandemic.

Replying to a question as to whether the march would be stopped from entering Bengaluru city that has been witnessing a spike in COVID cases, the Home Minister not giving any direct response said, the government will do everything possible to protect the city.

"The city is witnessing a spike by reporting nearly 10,000 cases, at such a situation, protecting the life of the people is the government's priority, and in case the situation deteriorates because of the march and leads to a lockdown-like situation, the Congress will have to take the responsibility," he said.