Of the total 34 ministerial positions in Karnataka, Congress and JDS have shared 22 and 12 respectively according to the coalition arrangement. 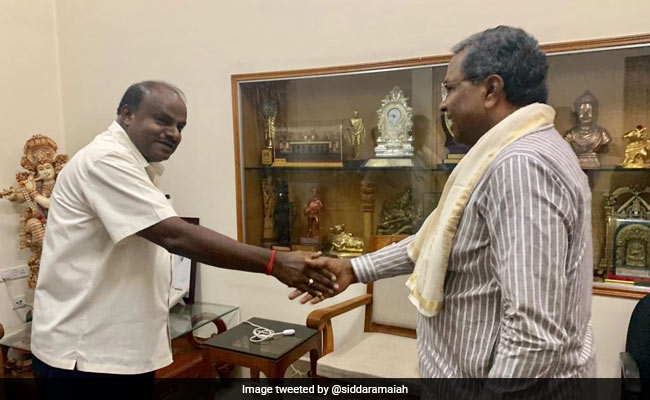 Amid speculation that a Cabinet rejig may defuse the crisis within the ruling Congress-JDS combine in Karnataka, coalition coordination committee chief Siddaramaiah said on Wednesday the vacant ministerial berths will be filled first.

The former chief minister, who is also the Congress Legislature Party (CLP) leader, said miffed party MLA Ramalinga Reddy would get an opportunity to serve as a minister during the next reshuffle.

Mr Reddy had on Tuesday had hit out at the Congress leadership for neglecting senior leaders of the party.

"I will speak to Ramalinga Reddy... I had told him that he will be made minister during the reshuffle. Now we are not doing reshuffle," Siddaramaiah told reporters.

"We have decided to fill one post that is vacant (from Congress' share of ministerial berths) due to Shivalli's death. When reshuffle happens Ramalinga Reddy will also get opportunity," he added.

Siddaramaiah and Chief Minister HD Kumaraswamy have held several rounds of meetings on whether to go for a Cabinet expansion or a reshuffle to avert a potential existential crisis to the one-year-old coalition, and to address the dissent within by asking a few ministers to step down to make way for the disgruntled lawmakers.

The leadership seems to have now reached a consensus about first filling up three vacant posts and then going in for a reshuffle if the need arises, sources said.

Of the total 34 ministerial positions in Karnataka, Congress and JDS have shared 22 and 12 respectively according to the coalition arrangement.

Currently, three posts are vacant, two from JDS party's share of ministerial berths and one from Congress'.

It is still not clear as to when the cabinet expansion will take place, however, sources said that it might happen by the end of this week.

In fresh trouble for the coalition, JDS state president AH Vishwanath on Tuesday resigned from his post flaying the functioning of the alliance while two senior Congress MLAs slammed the party's state leaders for the Lok Sabha poll debacle.

Vishwanath had hit out at Siddaramaiah for failing to ensure proper coordination between the Congress and the JDS, alleging that the coordination committee was dancing to the tunes of the former chief minister, who had "failed" to draw a common minimum programme for the smooth functioning of the government.

Reacting to the allegations, Siddaramaiah said, "He (Vishwanath) is not our party man, is he a Congress man? He is from JDS. I will not speak about JDS people, JDS leaders will speak about them."

On being blamed for HD Deve Gowda's defeat in Tumkur and claims that the JDS patriarch would have won if he had contested from Mysuru, Siddaramaiah said, "Ask them, who is responsible for Vijayshankar's (Congress'' Mysuru candidate) defeat... It is their party (JDS) who made him (Gowda) contest (from Tumkur), not our party."

During the seat-sharing talks ahead of the Lok Sabha polls, JDS had asked for Mysore seat and planning to field Deve Gowda from there, but Siddaramaiah was adamant on keeping the seat for Congress, as it is his home turf, and instead gave up Tumkur for JDS.