The arrest of Sanjjanaa Galrani comes days after the arrest of another Kannada actress, Ragini Dwivedi, on drug peddling charges.

Kannada actress Sanjjanaa Galrani has been arrested after the Bengaluru Police widened its probe into the illegal drug market and its alleged links with the Kannada film industry. The actor was questioned today before she was taken into custody, officials said. He arrest comes days after the arrest of another Kannada actress, Ragini Dwivedi, on drug-peddling charges.

"There are many verticals. Drug use and abuse has got no distinctions. All sections of society have gone into this. As a government it is our responsibility to ensure this menace is contained. Under the leadership of the Chief Minister, we are trying our best to break all kind of vertical supply chain, sources and users," Karnataka Deputy Chief Minister Ashwath Narayan said.

Ragini Dwivedi was arrested on Friday after her home was searched the same morning. Besides her, two people named Rahul and Viren Khanna were arrested. Ragini Dwivedi is in police custody which was extended by another five days on Monday.

Sanjjanaa Galrani was under the radar of the crime branch ever since her friend Rahul, a realtor, was charged in connection with the drug case, officials said. 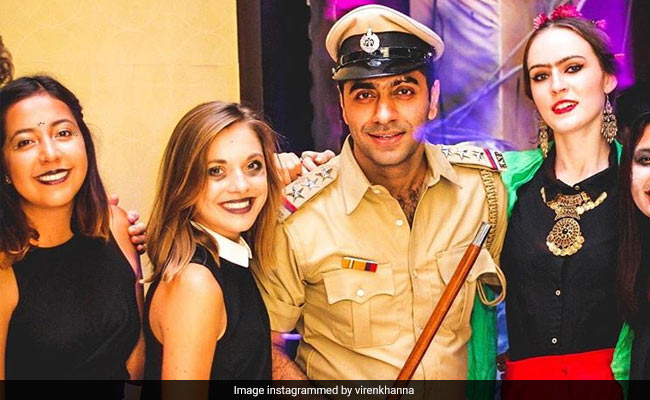 A fake police uniform was found at Viren Khanna's home during searches, the police said.

Six people have been arrested in the drugs case so far. The police questioned Ms Galrani based on the interrogation of a person named Nayaz on Monday.

The police had on Thursday arrested Ravi Shankar, who has links within the Kannada film industry, in connection with the drugs case and a court has sent him to police custody for five days. He is a clerk in the Road Transport Office.

According to police, Viren Khanna is a big catch. "He (Khanna) is the main person who organises big parties where drugs are consumed. He was in Delhi and two CCB police inspectors had gone to Delhi and arrested him," police officer Sandeep Patil had said last Friday.

"In the search at Viren Khanna's house, along with other things, one fake 'police' uniform was found with belt, cap, shoes and no stars," Mr Patil said today.

Ms Galrani was born in Bengaluru. She made her film debut in a Tamil movie "Oru Kadhal Seiveer" in 2006. She has also acted in the Kannada film "Ganda Hendathi".

A couple of weeks ago, Kannada filmmaker Indrajit Lankesh, brother of the late activist-journalist Gauri Lankesh, had appeared before the crime branch and shared information about the alleged use of drugs in the Kannada film industry. "I am grateful that Kamal Pant (Bengaluru police chief) has taken this initiative. I will tell them whatever information I have and help them. I want this investigation to go well with our support so that our industry gets justice. It is really good I welcome it. I want the industry to get justice and be cleaned up," Mr Lankesh said.