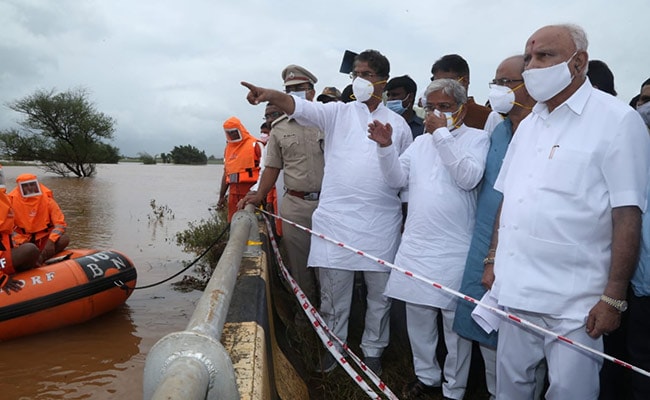 The flood situation in Karnataka continued to remain grim with 10 people losing their lives in rain related incidets and two reported missing over the past two days, even as Chief Minister BS Yediyurappa said on Sunday that he would write to the Centre to release funds for carrying out flood relief work.

Belagavi, Uttara Kannada, Dharwad and Haveri bore the brunt of the heavy downpour among the 11 affected districts, officials said.

He said KSDMA is monitoring and managing the flood risk, rescue and relief operations.

Meanwhile, Mr Yediyurappa told reporters after inspecting flood affected areas in Belagavi district that he would write to the Centre to release funds to enable the state carry out relief work in the flood hit regions.

The Chief Minister said 19,035 people in the district have been evacuated, while 8,975 people have been shifted to 89 relief centres. Food and accommodation for them has been taken care of, he said.

"Today I visited places like Nipani and Sankeshwara and flood relief centres. We had discussed the problems and the prevailing flood situation in Belagavi. Flood-related damage has occurred in 113 villages in seven taluks of Belagavi," Mr Yediyurappa said.

He attributed the floods to release of excess water from dams in the Krishna river in Maharashtra, where catchment areas had received torrential rain.

He said officials here were in touch with their Maharashtra counterparts and were keeping an eye on the discharge.

"We are keeping an eye on the flow of water. Since all the dams on Krishna have filled up, the outflow has been increased, due to which there is flood situation in various parts of the district," the Chief Minister.

He cautioned that the intensity of flood may increase.

About the flood relief measures in the district, he said seven NDRF and 15 SDRF teams, fire and emergency services, helicopters, Coast Guard and members of village level disaster management teams have been pressed into rescue and evacuation operations.

The Chief Minister said he would arrange for release of more funds and added that which is required for the time being will be released immediately to repair roads and bridges.

He said he would write to the Centre to release funds. "I am expecting funds from the Centre," he said.

Mumbai-Bengaluru Highway Shut For 3rd Day Due To Rain, Around 2,000 Vehicles Stranded