Election 2019: Queues were seen at polling booths as the voting began, with many arriving to vote early in the day to avoid the summer heat. 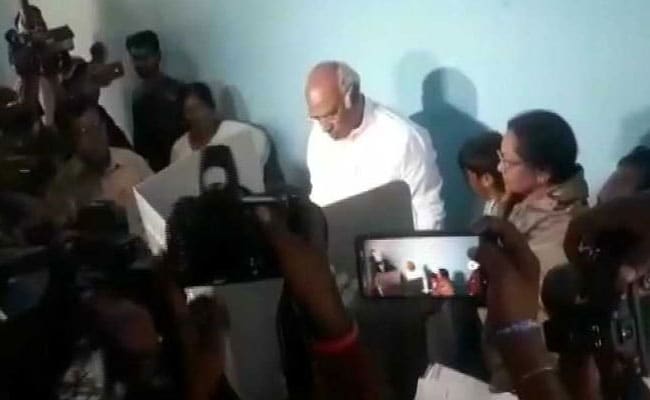 Second phase of polling is underway in the remaining 14 of the 28 Lok Sabha seats in Karnataka, where the contest is between the ruling Congress-JD(S) combine and the BJP.

Polling began at 7 am in 28,022 polling stations that are mostly in the northern belt of the state, covering the entire Hyderabad-Karnataka and Mumbai-Karnataka regions, a couple of central districts and coastal Uttara Kannada.

Queues were seen at polling booths as the voting began, with many arriving to vote early in the day to avoid the summer heat.

As many as 2,43,03,279 voters are eligible to choose their representative from among 237 candidates including 227 men and 10 women who are in the fray.

At 57, Belgaum has the maximum candidates, while Raichur (5) has the lowest.

The police have made elaborate security arrangements to avoid any untoward incidents.

The Bharatiya Janata Party (BJP) has considerable presence in the region and is aiming to improve its tally banking on the "Modi wave" and the support of the dominant Lingayat community, considered as its vote base.

For the Congress-JD(S) alliance, it is a high-stake battle as their performance is likely to have a bearing on the coalition government headed by H D Kumaraswamy.

A key constituency is Gulbarga, where leader of Congress in Lok Sabha Mallikarjun Kharge, a nine-time MLA and two-term Lok Sabha member who has never tasted electoral defeat.

He is said to be facing a tough battle against BJP's Umesh Jadhav, who recently joined the party after quitting as Congress MLA.

Umesh Jadhav was among the four MLAs against whom Congress had moved the Assembly speaker for disqualification under anti-defection law.

Several senior leaders like Baburao Chinchansur, Malka Reddy and Malikayya Guttedar from the region had quit the party and joined the BJP allegedly against dominance of Mr Kharge and his minister son Priyank Kharge, adding to the woes of the Congress in Gulbarga.

The spotlight is also on Shimogga, where the battle is between sons of two former chief ministers.

In Belagum too, the Congress faces an uphill task as the party is grappling with dissidence with senior leader and party's rebel MLA Ramesh Jarkiholi allegedly asking his supporters to support the BJP.

Jarkiholi, against whom a disqualification petition was moved by the party which is pending before the speaker, did not attend Congress president Rahul Gandhi's rally recently.

Of the 14 constituencies going to polls, the BJP is contesting in all the seats while the Congress and the JD(S) have fielded candidates in 12 and two constituencies respectively as per the seat sharing arrangement.

The Congress had its hold on 4 out of the 14 seats - Chikkodi, Gulbarga, Bellary, Raichur -- while the remaining 10 were represented by BJP MPs.

In the first phase, the 14 constituencies in southern part of the state covering old Mysuru region and couple of coastal districts had gone to polls on April 18, recording an overall voter turnout of 68.81 per cent.