SS Nakul, the District Collector of Karnataka's Bellary, where the wedding was held, has said that action will be taken against the persons concerned

The wedding of a Karnataka Congress MLA's son has attracted attention after visuals showed an estimated 800 people, including high-profile guests like Health Minister B Sriramulu, Siddaramaiah, Leader of the Opposition, and G Parameshwara, former Deputy Chief Minister, gathering in defiance of social distancing protocols in force during the coronavirus outbreak.

Multiple videos of the wedding of the son of Congress' PT Parameshwar Naik, who was the Labour Minister in the Siddaramiah government and now represents the Hoovina Hadagali constituency, showed hundreds gathered outside a large white tent set up in an open field in Laxmipura in Bellary district.

One of the videos showed a crowd of reporters, some without face masks, waving mobile phone cameras and rushing to take photographs as a white helicopter lands.

Another showed the newly-wed couple posing for photographs inside the tent as more than a dozen men and women, some of whom were, once again, not wearing face masks, stood shoulder-to-shoulder smiling for the camera.

A third showed close to a hundred people seated inside the tent during the marriage ceremony; the people sitting in the chairs were within touching distance of each other. 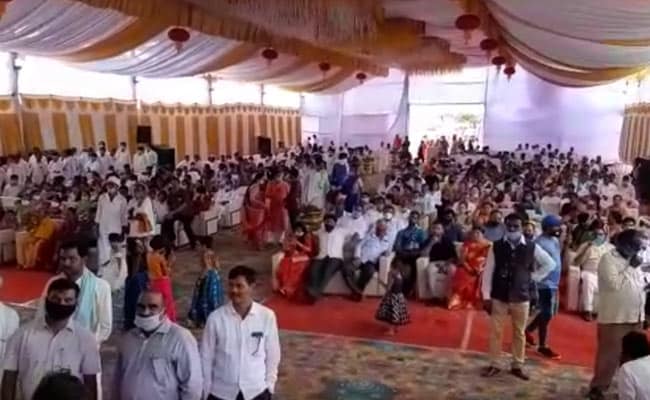 Bellary District Collector SS Nakul has said that action will be taken against the persons concerned. According to local police, the wedding organisers had taken permission for 50 guests - the number currently allowed at a marriage.

Mr Naik later asked the media to "co-operate and not to hype it (the incident)" as he made repeated requests on social media asking people to stay away from the wedding.

The massive crowd outside and inside the wedding tent was in direct defiance of at least two National Directives set out by the centre to manage the spread of the COVID-19 virus. 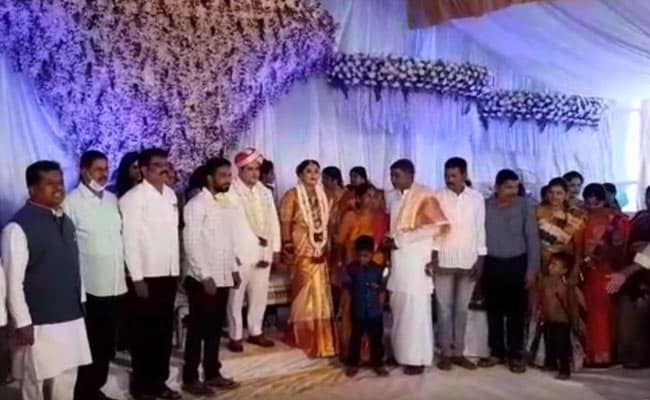 One states that the number of guests at wedding must not exceed 50. A second states that individuals must maintain a minimum of six feet distance from each other while in public spaces.

The apparent defiance of these guidelines comes around two months after another high-profile marriage ceremony made news.

In April the marriage of Nikhil Kumaraswamy, the grandson of former Prime Minister HD Deve Gowda, to Revathi, the grandniece of a Congress leader and former minister, was criticised after photos showed absolutely no social distancing.

India has seen a sharp increase in the number of coronavirus cases over the past few weeks, particularly since the centre announced plans for "Unlock1", or the phased relaxation of lockdown guidelines, including the re-opening of shopping malls.