No Pressure To Resign, Had Decided 2 Days Ago: BS Yediyurappa

BS Yediyurappa claimed he had decided to resign two days back, though on record he had firmly shut down reports about his replacement. 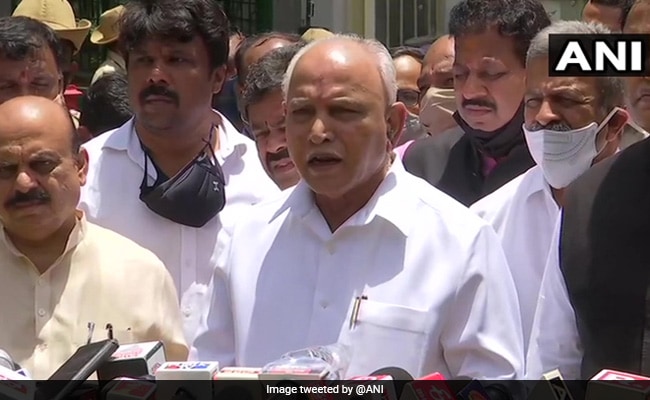 BS Yediyurappa added that he had not recommended any successors to his party BJP.

Soon after resigning as Karnataka Chief Minister today, BS Yediyurappa said he had done so not under any pressure but to make way for somebody else after a successful two years of the BJP government in the state. He also said he would work to bring the party back to power in the 2023 Karnataka polls.

"Nobody pressurised me to resign. I did it on my own so that someone else can take over as Chief Minister after the completion of two years of government. I'll work to bring BJP back in power in the next election," Mr Yediyurappa said after handing in his resignation to Karnataka Governor Thawar Chand Gehlot.

He added that he had not recommended any successors to his party BJP.

"We will work under whoever has been selected as the new CM by the (BJP) high command. I will give my 100 per cent and my supporters will also give their 100 per cent. There is no need to make any inference of dissatisfaction," he told reporters.

Mr Yediyurappa, who has never completed a term in his four stints as Chief Minister, claimed he had decided to resign two days back, though on record he had firmly shut down reports about his replacement. He had also met with powerful Lingayat leaders, who went to publicly urge the BJP not to destabilise the government by changing the chief minister mid-term.

By all accounts, his denials of any talk of resignation signaled that he had expected till the last minute to persuade his leadership to let him continue.

"It was a surprise for me. He told me that he may receive a favorable decision from the high command by July 26. But we all have to abide by the norms of the party," said state minister K Sudhakar.

This morning, Mr Yediyurappa broke down as he announced that he was resigning.

He claimed he had turned down then Prime Minister Atal Bihari Vajpayee's offer of a central role to serve Karnataka.

"Probably for various reasons, we could not get the majority (in the last state election). After all, there is agnipariksha (trial by fire) everywhere. I have faith that the party shall win 120-130 seats in the upcoming state assembly polls, whether I remain in power or not," said Mr Yediyurappa.

Mr Yediyurappa came to power for the fourth time in Karnataka after a series of defections brought down the Janata Dal Secular-Congress government in 2019. Most of the 17 MLAs whose abrupt resignations plunged the government into a minority joined the BJP and contested polls. Many of them were made ministers.

But Mr Yediyurappa faced calls for his sacking from his party colleagues over allegations of corruption, his "autocratic" style of functioning and the charge that his younger son BY Vijayendra interfered in the administration.