Read inOther Languages
This Article is From Jul 07, 2019

"Are We Sanyasis?": BS Yeddyurappa On BJP's Karnataka Action Plan 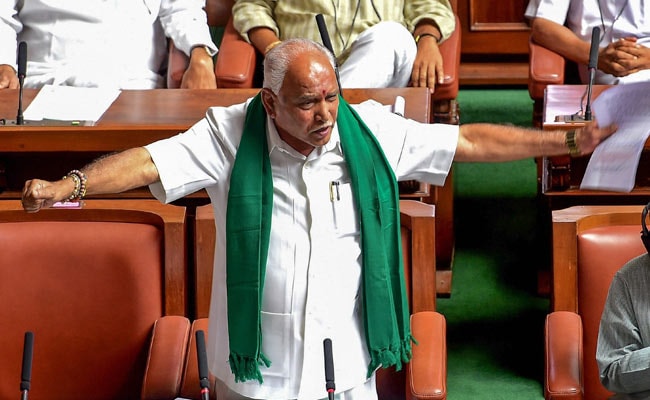 The BJP will take a call on Karnataka after the resignation 11 ruling Congress-Janata Dal Secular legislators is formally accepted, state unit chief B S Yeddyurappa said Sunday, adding those in the party are not "sanyasis" to rule out the possibility of forming the government.

"Let's wait and watch. Are we sanyasis (hermits)? After the resignation process is over and the speaker takes his decision, leaders of our party will discuss and decide," he was quoted as saying by news agency PTI in response to a question whether the BJP was preparing to form the government.

Speaking to reporters in Tumkur, the former chief minister said, "Ours is a national party, after discussing with the national leadership, we will take a decision."

Asked whether the coalition government will collapse, he repeated, "Let's wait and watch".

The Congress-JDS government has plunged into crisis, with at least 11 legislators of the alliance submitting their resignation to the speaker while he was not in office. The speaker, who is on leave, has said he will consider them Tuesday.

The rebel legislators said the latest round of resignations takes the number of exits from the ruling alliance to 14 - and came while Janata Dal Secular chief and Chief Minister HD Kumaraswamy was on a private visit to the US after the Lok Sabha elections. The Chief Minister and state Congress chief Dinesh Gundu Rao, who was also away, are rushing back to Bengaluru.

If the resignations are accepted, the year-old ruling coalition will no longer have majority in the assembly.

The Congress and the JDS together have 118 members in the 224-seat state assembly, along with one BSP and one Independent member. The defections will bring its numbers down to 105 and the majority mark in the assembly from 113 to 106. The BJP, which also has 105 legislators, has said it should be invited to form a new government if the ruling coalition lacks the numbers.

"From July 12, assembly session has been convened, the chief minister is abroad... According to me the coalition government has lost majority and it is the opinion expressed in all leading papers. This is the reality; a decision has to be taken by the speaker and the chief minister," Mr Yeddyurappa said.