Union minister Prakash Javadekar said Bengaluru has been reduced to a "garbage and crime city" ever since Siddaramaiah took over as chief minister. 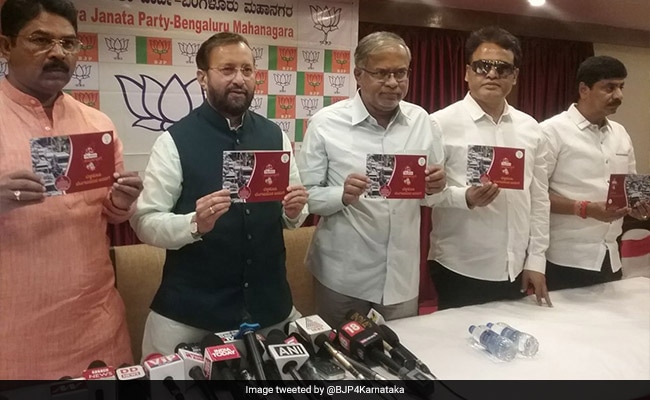 "A decent city has been converted into a crime city," Prakash Javadekar said.

Bengaluru: The BJP today brought out a Bengaluru-specific 'charge sheet' against the ruling Congress in Karnataka and announced the launch of 'protect Bengaluru yatra' from tomorrow.

Releasing the booklet carrying the "failures" of the Congress government, Union minister Prakash Javadekar said Bengaluru has been reduced to a "garbage and crime city" ever since Siddaramaiah took over as chief minister.

"The charge sheet is an eye opener. A decent city has been converted into a crime city. Now it's 'goonda raaj' when we see the happenings in the last one month," the union minister said.

'Bengaluru Rakshisi Padayatre' will begin from tomorrow with a pledge to revive our Bengaluru. A charge sheet was today released by BJP detailing @siddaramaiah's criminal neglect of Bengaluru. You can access the document here:https://t.co/8eRj15qgBp#BengaluruRakshisipic.twitter.com/7Nh54k5Cdu

He cited the recent incident where a video of a Congress leader, purportedly seen throwing petrol inside the municipal corporation office to set it on fire, went viral.

"Goondas are attacking police, robbing their houses and snatching their revolvers in Bengaluru," he claimed.

"Once considered as the safest city for women, Bengaluru has become the most unsafe city today due to increasing cases of rape, abduction and chain snatching. This is the transformation done by the Congress under Siddaramaiah," he said.

Promoted
Listen to the latest songs, only on JioSaavn.com
The union minister said his party would visit all the 28 constituencies of the city and impress upon people to root out the Congress by voting the BJP.

About Siddaramaiah's charge that the BJP was full of leaders who have been to jail on corruption charges including state BJP chief B S Yeddyurappa, Mr Javadekar said a reply has been given in the past and there was no need to discuss it anymore.
Comments
BengaluruPrakash Javadekar