According to a data released by the Ministry of Personnel, the recruitment of Staff Selection Commission (SSC)'s Combined Graduate Level or CGL examinations saw more Bachelor of Technology (B.Tech) graduates being selected for one of the most in demand public sector hiring in the country.

For the last two SSC CGL recruitment completed by the Commission, 5,176 B.Tech graduates were selected for 2016 recruitment, while it was 4,546 for year 2017.

Along with the B.Tech graduates, 825 and 800 Bachelor of Engineering or BE graduates were selected for recruitment year 2016 and 2017 respectively. 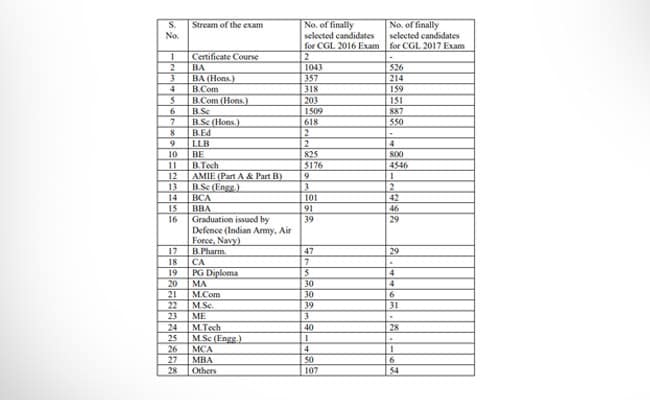 The data regarding the number of graduates and their streams selected for SSC CGL recruitment in years 2016 and 2017.

However, the ministry said the syllabus of the SSC examinations is designed in such a manner that it provides a level playing field for all the candidates, irrespective of their stream.

"The multiple tiers of the exam ensure that the candidates are examined on an array of topics comprising General Intelligence and Reasoning, General Awareness, English comprehension, Quantitative Aptitude etc.," it said.

The educational qualification of the candidates was not captured for CGLE 2015.

Based on the data available for the years 2016 and 2017, the percentage of candidates selected from technical background is 56.81% and 66.22%, respectively, the ministry informed the Parliament today.