Pradeep Singh, an Indian Revenue Service (IRS) officer (Custom and Excise) from Sonipat, Haryana, has notched the first rank in the Civil Services exam 2019, results of which were announced on Tuesday by the Union Public Service Commission (UPSC). 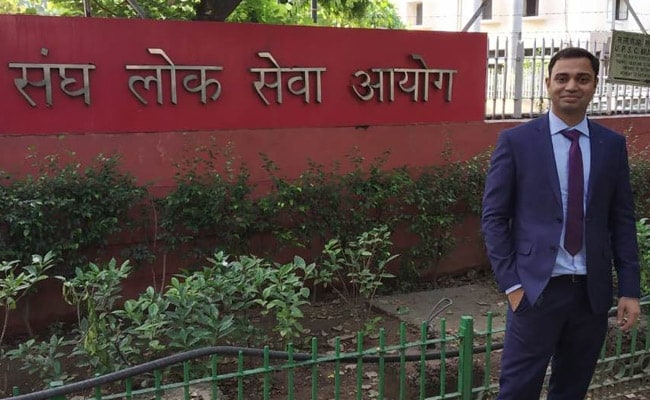 Pradeep Singh, an Indian Revenue Service (IRS) officer (Custom and Excise) from Sonipat, Haryana, has notched the first rank in the Civil Services exam 2019, results of which were announced on Tuesday by the Union Public Service Commission (UPSC). Mr Singh, who cleared the coveted recruitment examination in his fourth attempt, shared his preparation strategies with aspiring students while speaking with NDTV exclusively.

"Preliminary, mains and interview phases are quite different from each other and should be prepared accordingly," says Mr Singh, who had also served the tax department before serving as an IRS officer.

"It is important to focus on writing skills to pass the main exam while interpersonal skills are essential for clearing the interview stage," Mr Singh, a former Computer Science student of Murthal University, said.

Mr Singh said that he took public administration as an optional subject.

"It is like a dream come true. It is a pleasant surprise for me. I always wanted to be an IAS officer. I would like to work for the deprived sections of society," Mr Singh, son of a farmer, told PTI.

29-old Singh, a 2019-batch IRS officer, is undergoing probation at the National Academy of Customs, Indirect Taxes and Narcotics (NACIN) in Faridabad, cleared the exams in his fourth attempt.

Mr Singh had got 260th rank in the 2018 exams, results of which were declared last year. He told PTI that there were times when he felt that he was losing focus, but his father, a farmer, kept motivating him.

He said his main emphasis would be on improving education and farm sectors as he has become part of the most sought-after Indian Administrative Service.

"I have opted for my home state Haryana as the preferred cadre state for the IAS. I am happy that I will now get the chance to work for my state," said Mr Singh.

"My parents motivated me a lot to be part of the civil services. It is because of them that I would get into IAS now," he said. His elder brother works as a surveyor and his younger sister is studying.

A total of 829 candidates have been selected to various Civil Services through the 2019 edition of the exam.

Among those who have qualified, at least 12 are from Jammu and Kashmir. Six of these candidates hail from Kashmir, including Nadia Beigh from remote Kupwara district who secured 350th rank.

Hardwork, consistency and support of family were key to their success, many of the candidates said.