92 IPS Probationers, Including 12 Women, Pass Out From National Police Academy

The probationers included 57 engineering graduates and 11 medicos, while seven hold a Masters degree in business administration. 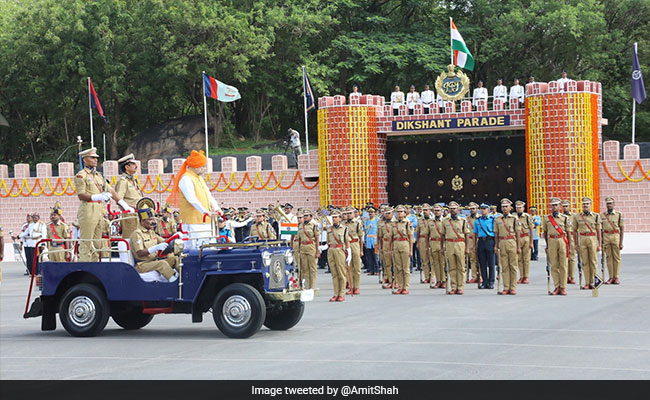 I am sure that these officers will do their best to serve our nation and to uphold the dignity of Indian Police Service.

Best wishes to everyone. pic.twitter.com/T7EUfdfkTI

The probationers included 57 engineering graduates and 11 medicos, while seven hold a Masters degree in business administration.

Besides the 92 IPS probationers, six officers from the Royal Bhutan Police and five from Nepal Police also passed out of the Academy.

Most of the probationers come from ordinary backgrounds. Gaush Alam of Delhi, allotted to the Telangana cadre, received the Prime Minister's Baton and the Home Ministry's Revolver for best all round probationer.

Gaush Alam also received the Mehta Cup for studies and the BSF trophy for proficiency in outdoor subjects.

Originally hailing from Gaya district in Bihar, Mr Alam was brought up in Delhi. His father was a Subedar in the Army and died when he was very young.

A mechanical engineer from IIT-Bombay, Mr Alam also worked in a multi-national company before appearing for UPSC exam.

Richa Tomar of Uttar Pradesh received the 1973 IPS batch trophy for the best all round lady probationer. Daughter of a farmer from Uttar Pradesh, she has been allotted to Rajasthan.

Richa, mother of a two-and-a-half-year-old son, is the fourth of the six children, and her husband is an Assistant Commissioner of Police in Delhi.

(This story has not been edited by NDTV staff and is auto-generated from a syndicated feed.)
Comments
IPS