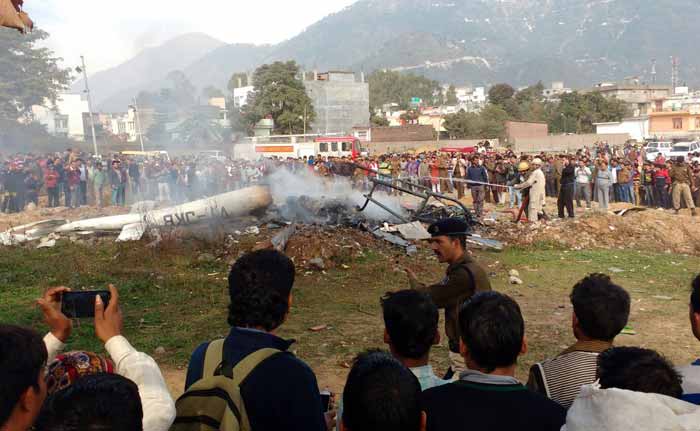 A team of DGCA visited the crash spot yesterday and initiated a detailed investigation in the accident.

Jammu: Vaishno Devi Shrine Board has asked Directorate General of Civil Aviation (DGCA) to conduct a detailed safety audit of the helicopter operations between Katra-Sanjichhat sector in Jammu and Kashmir, where a recent chopper crash killed six pilgrims and a woman pilot.

The chopper services, which were suspended as a precautionary measure after the crash in Katra on Monday, resumed its operations today with trial flights.

Shri Mata Vaishno Devi Shrine Board (SMVDSB) has asked DGCA to conduct a safety audit in detail in the particular belt in Reasi district, from where nearly one crore people visit the shrine every year.

"The CEO of the Shrine Board, on the instructions of J&K Governor N N Vohra who is also the Chairman of the Board, approached the DGCA to separately conduct a detailed safety audit of the Heli operations between Katra-Sanjichhat-Katra sector," a senior official of Board said.

A team of DGCA visited the crash spot yesterday and initiated a detailed investigation in the accident.

The 2010-make chopper of private airliner Himalayan Heli service, which was carrying six pilgrims from Sanjichat helipad in Trikuta hills, crashed at the new bus stand area in Katra.

A separate team of DGCA officials reached Katra today and started conducting audits on various air safety norms such as airworthiness of the helicopters, operation and maintenance procedure being followed by the operators, the official said.

The Shrine Board officers also attended the last rites of all the passengers in Jammu and Delhi.

The Board also attended to the family members of the deceased pilot and made arrangements for the transportation of her body to Delhi.

Meanwhile, the yatra to the Holy Shrine is proceeding normally and a fair amount of pilgrims were seen trekking the shrine on foot, ponies and palanquins.

Deputy chief minister Nirmal Singh yesterday said, "As per initial information, a bird got caught in the tail rotor as a result of which it stopped functioning. Finding the area below populated, the woman pilot chose a safe landing at the new bus stand to avoid casualties on the ground.

"As the plane was descending, its rotors got entwined in electrical wires and caught fire," he had said.