Anita Bhatia has been appointed the Deputy Executive Director of the United Nations Entity for Gender Equality and the Empowerment of Women (UN-Women) for Resource Management, Sustainability and Partnerships. 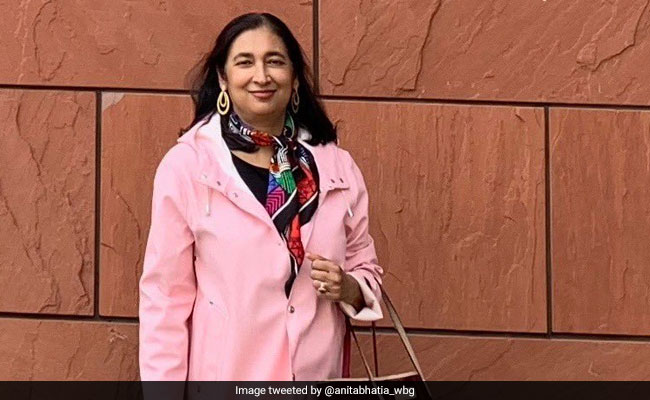 Indian-origin Anita Bhatia, a veteran in strategic partnerships, resource mobilisation and management, has been appointed by UN Secretary-General Antonio Guterres as the Deputy Executive Director in the global body's agency focussed on women empowerment and gender equality.

Ms Bhatia holds a Bachelor of Arts in History from Calcutta University, a Master of Arts in Political Science from Yale University and a Juris Doctor in Law from Georgetown University.

She has been appointed the Deputy Executive Director of the United Nations Entity for Gender Equality and the Empowerment of Women (UN-Women) for Resource Management, Sustainability and Partnerships, a statement from the UN Spokesperson's Office and UN Women said on Thursday.

She has had a distinguished career at the World Bank Group, serving in various senior leadership and management positions, both at the headquarters and in the field.

Veteran Indian diplomat and a gender equality champion Lakshmi Puri had previously served as the Assistant Secretary-General of the United Nations and Deputy Executive Director of UN Women.

She developed and expanded innovative partnerships with public and private sector partners to support IFC strategy in key areas, including fragile and conflict-affected states, gender equality, financial inclusion, support to women-owned businesses and other priorities critical to attainment of the Sustainable Development Goals.

In addition, Ms Bhatia has served as Director of Development Partner Relations for the World Bank, leading efforts to ensure strategic alignment between institutional priorities and resource mobilisation across the group.

In various positions, she focused on enhancing sustainability, institutional effectiveness and impact through strategic partnerships.

As Head of IFC's Latin America Advisory Operations, based in Lima and La Paz, she successfully grew the Corporation's reach and impact in the region.

As Director of Partnerships and Advisory Operations, she oversaw financial management, risk management, portfolio management, knowledge management and learning for Advisory Services across the globe.

Ms Bhatia has led diverse teams, including as Global Head of Knowledge Management, Head of Business Process Improvement and Head of Change Management. In addition to Latin America, she has worked in Africa, Europe, Central Asia and South and East Asia.