Tollway Renamed In Memory Of India-American Cop In Houston

Sandeep Singh Dhaliwal, 42, was the first Sikh sheriff's deputy in Harris county with a population of over 10,000 Sikhs. 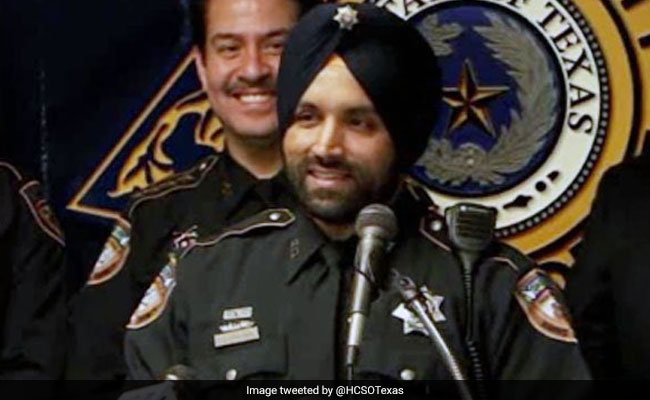 Sandeep Singh Dhaliwal was gunned down in September last year.

A portion of a tollway in Houston was renamed after Indian-American police officer Sandeep Singh Dhaliwal who was shot dead on duty during a traffic stop.

Sandeep Singh Dhaliwal, 42, was the first Sikh sheriff's deputy in Harris county with a population of over 10,000 Sikhs. He made national headlines when he was allowed to grow a beard and wear a turban on the job.

He was gunned down in September last year while conducting a routine mid-day traffic stop in northwest of Houston.

Sandeep Singh Dhaliwal was scheduled to be promoted to a supervisor role where he would have mentored younger deputies on community policing. His death resonated across the US and the world and tributes to his memory continued with the renaming of a section of Beltway 8 tollway between Texas 249 and US 290 after him last week.

The Harris County Toll Road Authority put up the sign ''HCSO Deputy Sandeep Singh Dhaliwal Memorial Tollway'' near Texas 249 in the memory of the Indian-American police officer. A special ceremony was also performed at the Gurdwara Sikh National Centre on the occasion.

Sandeep Singh Dhaliwal, a father of three, joined the force 10 years back and was the state's first law enforcement officer to receive permission to wear a religious turban and beard while on duty.

Sim Singh, senior manager for policy and advocacy for the Sikh Coalition, said Sandeep Singh Dhaliwal was a hero to the community and many religious minorities who aspired to have a career in public service. He said they are still continuing to fight for religious equality, a road Dhaliwal helped build.

"It's historic and it's a meaningful gesture to the Sikh community," he said.

The death of the beloved deputy sparked massive change within the sheriff's department.

"Deputy Dhaliwal represented the very best of our community: he worked for equality, connection, and community through his life of service to others," Fletcher said at the time.

Since his murder, local law enforcement agencies have changed policies to include members of the Sikh faith.

"Dhaliwal was a trailblazer, hero and role model. Gone but not forgotten. We miss our friend and brother," Harris County Sheriff Ed Gonzalez said.

"It obviously changed our world upside down both as an agency and me personally, being that I had a personal relationship with Sandeep and his family," said Sheriff Gonzalez.

Since the murder, the Houston Police Department and the county's eight constables have changed policies to allow officers on duty to wear turbans and carry religious items.

The sheriff's office now has two Sikh deputies, and in January, Precinct 1 became the first local agency to swear-in a deputy constable who was wearing a turban.

"In this year, which has been filled with turmoil and so much division, it seems at times between community and law enforcement," Gonzalez said, "I think that Sandeep showed us an example of what it could be that everybody could serve, that everybody could connect and embrace the community."

"For me, he's never gone," said his father, Pyara Dhaliwal. "Something I can't show, I can't picture. But I can feel it."

He is overwhelmed by the renaming of the road and for renaming the post office after his son. "It's an honour for me to see my son''s memory memorialised in such a great national platform," he said.