Portugese PM Gets Pravasi Bharatiya Award, NRIs From US Win At Least 6 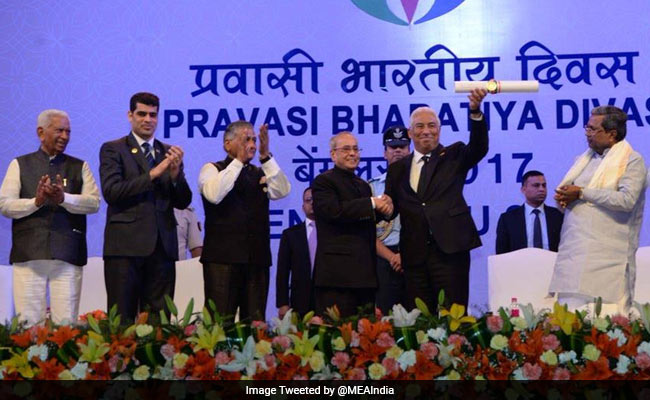 Bengaluru: Non-Resident Indians (NRIs) from the US led the list of 30 persons conferred the Pravasi Bharatiya Samman awards by President Pranab Mukherjee in Bengaluru today.

The first award was received by Portugal Prime Minister Antonia Luiss Santos Da Costa for his contribution in the field of public service.

As per the list, six awards were given to NRIs from the US, the highest in the list, while two each to those from the UK and UAE.

One award each was given to NRIs from 20 countries, including Australia, France, Canada, Israel, Libya, Fiji, Brunei, Singapore, Portugal and others.

Neena Gill and Priti Patel from the UK were honoured for their contribution in the field of public service.

In the list of NRIs from the UAE, Vasudev Shamdas Shroff and one organisation Indian Social and Cultural Centre were awarded.

In the field of business, Rajasekharan Pillai Valavoor Kizhakkathi from Bahrain, Mukund Bhikhubhai from Canada and Susheel Kumar Saraff from Thailand were honoured.

In the field of medical science, Lael Anson E Best from Israel and Carani Balaraman Sanjeevi were selected.

Sandip Kumar Tagore from Japan was awarded for his contribution in the field of arts and culture, while Muniandy Thambirajah from Malaysia and Zeenat Musarrat Jafri from Saudi Arabia were honoured for education and community service.

Promoted
Listen to the latest songs, only on JioSaavn.com
In the field of public service, Pravin Kumar Jugnauth from Mauritius and Winston Chandarbhan Dookeran from Trinidad were honoured.

Vinod Chandra Patel from Fiji was selected for his contribution in the field of social service.