During the raid in April last year, three robbers had tricked their way into the shop using fake security industry ID badges and claiming they needed to carry out CCTV checks. 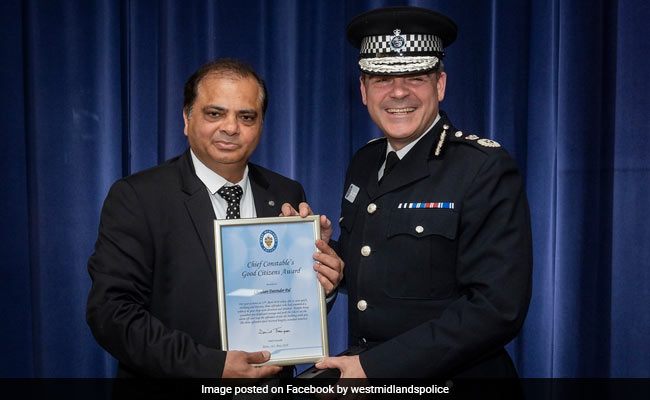 An Indian-origin jeweller who helped police arrest robbers who bound and gagged him at his jewellery store in Birmingham has been honoured with a bravery award.

Chouhan Pal was presented with the West Midlands Police Chief Constable's Good Citizen's Award last week for his handling of the attack on his Dubai Jewellers shop, during which he was assaulted, bound with ties and had tape put over his mouth.

"Despite being assaulted, you displayed courage and took the risk to set the alarm off and trap the offenders inside the building with you," Chief Constable Dave Thompson told Pal, in his 50s.

"Your quick-thinking actions and bravery allowed three offenders who had committed a robbery in the jeweller's shop you own to be detained and arrested," he said.

During the raid in April last year, three robbers had tricked their way into the shop using fake security industry ID badges and claiming they needed to carry out CCTV checks.

Mr Chouhan managed to hit an alarm with his shoulder, trapping the gang in the shop and setting off a smoke cloak.

A passer-by heard their cries for help and let the men out, thinking there was a fire. But police arrived and the passers-by and Mr Chouhan helped them detain the gang.

All three went on to admit robbery at Birmingham Crown Court and were jailed for 14, 12 and nine-and-a-half years respectively in July last year.