Arora Akanksha, 34, working as an audit coordinator for the United Nations Development Programme (UNDP), said she will run for the post of the world's top diplomat and launched her campaign #AroraForSG this month. 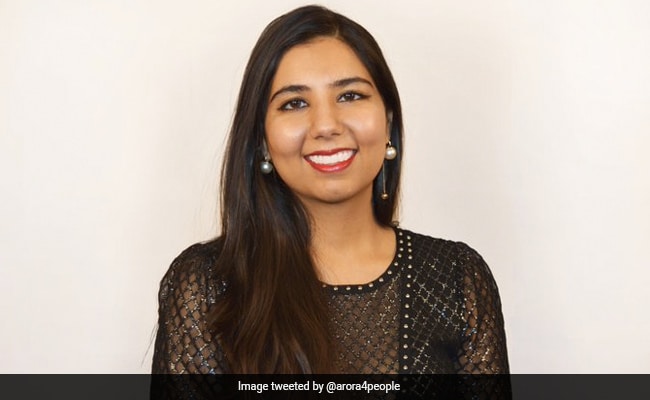 Arora Akanksha, 34, works as an audit coordinator for the UN Development Programme (UNDP)

An Indian-origin employee at the UN has announced her candidacy to be its next Secretary-General, the first person to throw her hat in the ring against incumbent Antonio Guterres, who is seeking a second five-year term beginning January 2022 as chief of the world organisation.

Arora Akanksha, 34, working as an audit coordinator for the United Nations Development Programme (UNDP), said she will run for the post of the world's top diplomat and launched her campaign #AroraForSG this month.

"People in my position aren't supposed to stand up to the ones in charge. We are supposed to wait our turn, hop on the hamster wheel, go to work, keep our heads down and accept that the world is the way it is," Ms Akanksha said in a two-and-a-half minute campaign video posted online.

The video shows Ms Akanksha walking inside the sprawling UN headquarters, as her voiceover says that people who have come before her have "failed to hold the UN accountable".

"For 75 years, the UN has not fulfilled its promise to the world - refugees haven't been protected, humanitarian aid has been minimal, and technology and innovation has been on the back-burner. We deserve a UN that leads progress," she says.

"That is why I am running for the Secretary-General of the United Nations. I refuse to be a by-stander. I will not accept this is the best the UN can do," she says in the video.

Last month Antonio Guterres, 71, had confirmed that he will seek a second five-year term as chief of the world organisation.

Mr Guterres's first term ends on December 31 this year and the term of the next Secretary-General will begin on January 1, 2022.

Mr Guterres assumed office on January 1, 2017 after a reformed selection process that included a public informal dialogue session in the UN General Assembly.

Stephane Dujarric, Spokesman for the Secretary-General, responding to a question at the daily briefing on the UNDP staffer announcing her candidacy for Secretary-General, said "Antonio Guterres is a candidate for the selection process. It's not for him to comment on other people who may want to come forward."

"This is a process run by Member States. So, I'm not aware of any issues or problems with that. I speak for the incumbent candidate, but we have no comment on anyone else who may wish to put their hat in the proverbial ring," Mr Dujarric said.

The spokesperson for UN General Assembly President Volkan Bozkir, Brenden Varma was asked at the press briefing whether Arora Akanksha had written to the President on her candidacy.

Mr Varma said the President's office had not received any formal communications on this matter.

Mr Varma had earlier said that so far the General Assembly President had not received any notifications of candidacies for the position of Secretary-General from Member States.

He added that candidates have traditionally been presented by Member States.

In the video, Ms Akanksha adds that it is time that the "UN stop serving politicians and start serving people".

"It is time for a new United Nation - a UN that is a guardian for refugees, takes humanitarian crises through to completion and gets technology and education in the hands of all," she says.

She also says that these ideas are not impossible and don't need another 75 years to accomplish.

"It takes someone being bold, being a first - first to speak up, first to take action, first to make a difference and now first to challenge the UN. I'm no longer waiting for the torch to be passed down, I'm taking it because I am part of the generation of change where we don't just talk about change, we cause change," she says.

She also thanked supporters on Twitter and urged them to vote.

Thank you for your support! Please go on https://t.co/Gb2t2vrh3L and vote for a #UNThatWorks. We the people are more powerful than any system. pic.twitter.com/nVzS6hYHuo

According to her profile on her website UNOW.org, Arora Akanksha graduated from York University, Toronto with a Bachelor of Administrative Studies.

She received her Master in Public Administration from Columbia University.

Her profile states that she was recruited at the UN to help with the financial reforms of the organisation and her work included updating financial regulations and rules of the UN and managing the internal and external audits at UNDP.

A report in news site PassBlue said India-born Arora Akanksha has an Overseas Citizenship of India and a Canadian passport.

She hasn't asked either country for an official endorsement. She is nevertheless hopeful that her candidacy could shake up the selection process, the report said.