Indian Family Disappeared During Road Trip In US, Divers Found 2 In River

On Sunday, searchers found the bodies of Sandeep Thottapilly and his 9-year-old daughter inside the vehicle that was submerged in the Eel River. 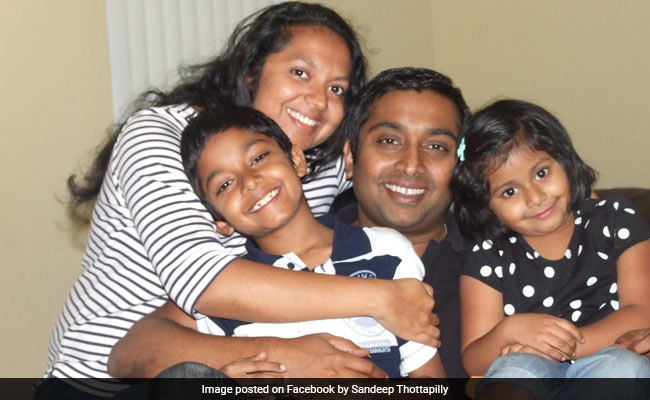 The Thottapilly family were supposed to meet with relatives in San Jose.

Investigators have found and identified the bodies of three family members who vanished while on a road trip from Oregon to California.

The discovery followed more than a week of search efforts for Sandeep Thottapilly, his wife, Soumya, and their two children, who disappeared while traveling to meet with family members in San Jose. Witnesses in Mendocino County - the same Northern California locality where another family died last month after apparently driving off a cliff - reported seeing an SUV being swept away in a river. A poster shared by friends and relatives on social media suggested that the SUV matched the Thottapilly family's vehicle.

On Sunday, searchers found the bodies of 41-year-old Sandeep Thottapilly and his 9-year-old daughter, Saachi, inside the vehicle that was submerged in the Eel River. The smell of gasoline emitting from the water led divers to the vehicle, which was covered in sediment and resting at least four feet underwater, according to the Mendocino County Sheriff's Office.

Searchers are still looking for the couple's son, 12-year-old Siddhant.

The Thottapillys were last heard from April 5. They had been traveling from Portland, Oregon, and were supposed to meet with relatives in San Jose the following day before going back to their home in Santa Clarita, California, just outside of Los Angeles. But the Thottapillys never made it to San Jose and were later reported missing, police said.

The poster shared on Facebook described the family's vehicle as a maroon or burgundy 2016 Honda Pilot.

On April 6, witnesses reported seeing a similar-looking vehicle falling off a steep embankment and into the Eel River off U.S. Route 101 near Leggett, a small camping and hiking destination in Northern California, authorities said. Searchers found car parts and determined that they came from a maroon Honda Pilot.

Search and rescue efforts were initially hampered by heavy rainfall that caused the Eel River to swell and be clouded by mud and debris, Officer William Wunderlich told the Los Angeles Times.

Promoted
Listen to the latest songs, only on JioSaavn.com
The incident happened roughly 30 miles from the area where another family's SUV plunged 100 feet down a cliff off the scenic Pacific Coast Highway and into the ocean. The crash killed a married couple, Jennifer Jean Hart and Sarah Margaret Hart, both 38, and at least three of their six children. The other three are feared to be dead. Investigators said that vehicle may have been intentionally driven off the cliff.