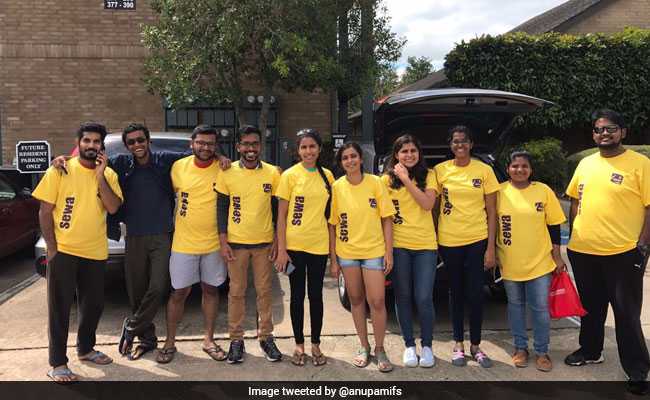 A group of Indian students volunteering in Houston storm shelters

Houston: Indian-Americans in Texas, especially the youth, are helping hundreds of people affected by catastrophic floods caused due to Hurricane Harvey by giving food, shelter and medical assistance.

Though they themselves are affected, the Indian-Americans have formed numerous volunteer groups by using Facebook and WhatsApp to communicate details about the families affected in each locality.

Indian restaurants have been reaching out to people with free food and providing water, medical supplies, toiletries, baby food and cleaning supplies.

Approximately 150,000 Indian-Americans and Indians live in the greater Houston Area, according to Indo-American Chamber of Commerce of greater Houston Executive Director, Jagdip Ahluwalia, who is a long-time Houstonian. "This time the power of young and dynamic is really visible as first generation Indian-American teenage kids are enthusiastically registering for providing Harvey relief at
major shelters and food banks under the banner of SEWA International," said Vijay Pallod, an active Houston Community member.

Hurricane Harvey, one of the most destructive storms in US history, is a tropical cyclone that is causing unprecedented and catastrophic flooding in southeastern Texas.

SEWA International Houston Chapter's President Gitesh Desai has estimated that one in four Indian-Americans has been displaced in the catastrophe.

Dinesh Thakur, owner of India Cafe has been helping many shelters every day with fresh cooked meals and other supplies.

Rescue work has intensified in the US state of Texas as officials have launched search operations to help people stuck in receding floodwaters in the aftermath of Hurricane Harvey that has claimed at least 47 lives.