"Hero For His Community": How Sikh Cop Killed In US Touched Many Lives

The first turbaned Sikh cop to serve Texas, many said he was called a "trailblazer". 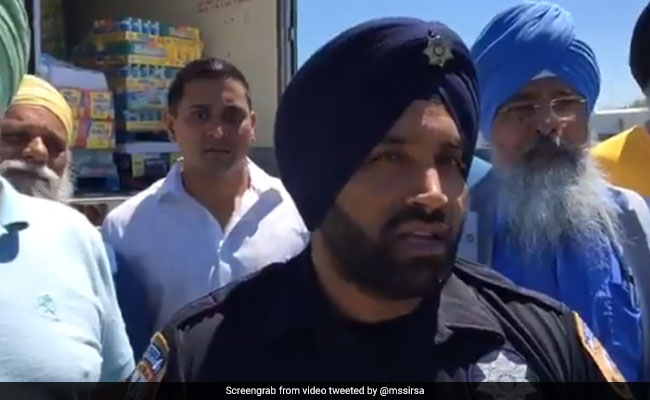 Sandeep Dhaliwal, the Indian-American Sikh police officer who was shot dead in US on Friday during a traffic stop, was a "hero for his community" during Hurricane Harvey that hit Texas in 2017, the New York Police Department said today. He touched many lives during his 10 years of service, according to his colleague.

In rich tributes, Mr Dhaliwal, a 10-year veteran of the Texas police department, was remembered on social media as a cop known for his compassion. The first turbaned Sikh cop to serve Texas, many said he was called a "trailblazer".

Mr Dhaliwal, who was was the deputy sheriff of Harris County, was shot dead during a traffic stop.

A video which shows him thanking the members of Sikh community for helping with Harvey relief efforts in 2017 was shared on Twitter by the Harris County department that called him an "extraordinary individual".

Remembering his passion to help the community, Chief Terence A. Monahan, NYPD Chief of Department, wrote on Twitter: "The NYPD stands with our brothers & sisters in @HCSOTexas as we mourn the loss of Deputy Sandeep Dhaliwal. A hero for his community during Hurricane Harvey & beyond, Deputy Dhaliwal was shot & killed in the line-of-duty by a violent criminal during a traffic stop. #NeverForget. (sic)"

Deputy Sandeep Dhaliwal was an extraordinary individual, after Hurricane Harvey he collected supplies to help the community.

On this video, you can see him thanking United Sikhs for their donations. https://t.co/ojp50lSRfc

In another video, shared by a resident of Texas, he is handcuffed by a deaf child as he jokes with the kid and other people sitting around him. "He laughed and joked with all of us, and left a bright impression on my son who is deaf," the resident said.

"He touched countless of lives along the way. A legacy that will never be forgotten," wrote his senior colleague Ed Gonzalez, referring to the video.

This video captures the essence of who Deputy Dhaliwal was. He touched countless of lives along the way. A legacy that will never be forgotten. We will aspire to be as good as he was. #HouNews#lesmhttps://t.co/c3i2eBBLMv

A 47-year-old suspect, Robert Solis, has been taken into custody and "charged with the capital murder" in the Sikh police officer's murder. It is not yet clear if it was a hate crime.

At an impromptu vigil, people paid their last respects to the Indian-American cop.

Impromptu memorial for fallen Deputy Sandeep Dhaliwal. Thanks to the community for all the support. @HCSOTexas@SheriffEd_HCSOpic.twitter.com/Zs9otVR83y

Reacting to the killing, Foreign Minister S Jaishankar paid condolence to the Indian-American cop this morning. "Deeply grieved to learn of the shooting of Deputy Sandeep Singh Dhaliwal, a Sikh Indian-American officer in Houston. We have just visited that city. My condolences to his family," he tweeted.

My heart goes out to his family. He is survived by a wife & three children.
Sikhs have been at the receiving end of such hate crimes and racial attacks in US. The trend is worsening day by day.
With deep anguish, I request @DrSJaishankar Ji to address this issue on global level https://t.co/9qp6Ra55W6

Mr Dhaliwal is survived his wife and three children.