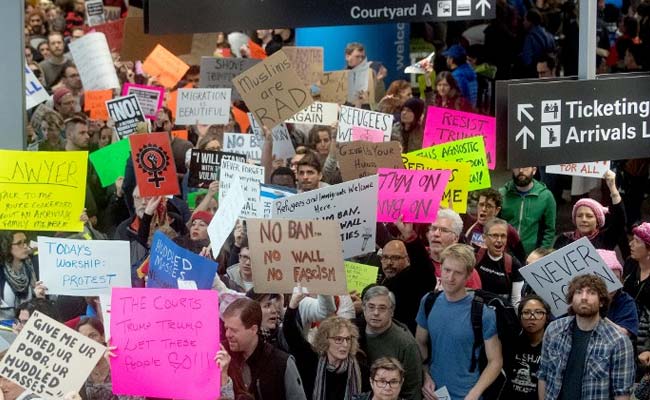 "Make no mistake: this ban does not keep us safe. It puts American lives at risk while isolating the Muslim community at a time when we need to address the threat of home grown extremism. No matter the changes, this executive action remains immoral and fundamentally un-American," said US Senator from California Kamala Harris. She, however, welcomed the decision to omit Iraq from the list of banned countries.

Ms Harris' words were echoed by her fellow colleagues in the House of Representatives Ami Bera, Raja Krishnamoorthi, Ro Khanna and Pramila Jayapal.

"The new order recognised that we must honour the visas of those who already have been given clearance to come to the United States, as well as excludes legal permanent residents and dual citizens affected by the ban," Ms Jayapal, the first Indian-American woman elected to the US House, said.

"This is a bad second swing at an executive order that is just as un-American and xenophobic as the first version, that was struck down by multiple courts. As Americans, we do not close our doors to those who are fleeing persecution, or target people based on their faith," Mr Bera said.

Mr Trump signed the new travel ban on Monday, which bars immigrants from Syria, Iran, Somalia, Sudan, Yemen and Libya for a period of 90-days. Furthermore, the United States has also halted their refugee program for 120-days and has decided to induct not more than 50,000 refugees per year - a drop from the 110,000 limit set by the Obama administration.

Promoted
Listen to the latest songs, only on JioSaavn.com
An advisory released US State Department has also warned citizens from travelling to South Asian countries Pakistan, Bangladesh and Afghanistan. It also claimed that extremist elements are also active in India which could target US embassies and interests.