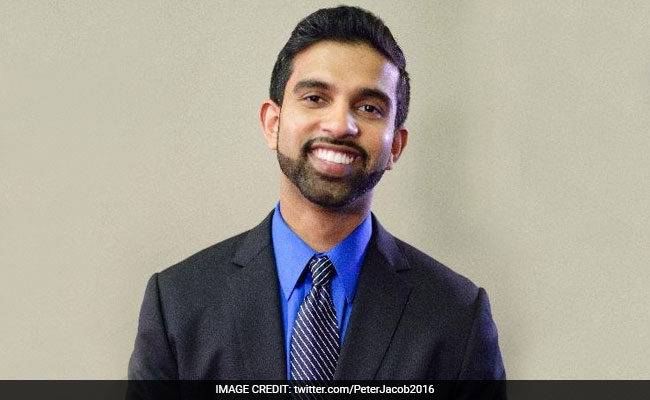 Peter Jacob, Indian-American social-worker running for the US Congress in New Jersey.

Washington: The home of an Indian-American social-worker running for the US Congress in New Jersey was vandalised and painted with large swastikas by some unidentified miscreants, prompting police to launch a probe.

"These racists came back to my home and spray painted large swastikas (on) our walls," said Peter Jacob, 30, who is running for the US House of Representative from 7th Congressional District in New Jersey which is known to be a strong Republican bastion.

Police is investigating the case.

"It is completely un-American and unacceptable that someone should do this in such a beautiful and diverse community," Mr Jacob said.

"Let there be no mistake, the people who committed this crime did so because they feel comfortable and confident to commit hateful acts due to an ever increasing atmosphere of accepted racism," he said.

Endorsed by Vermont Senator Bernie Sanders, Mr Jacob, is seeking to unseat incumbent Republican Leonard Lance who is representing the seat since 2009.

Mr Lance has condemned the incident of vandalism.

"The display of anti-Semitic symbols like the swastika is abhorrent. We join Peter Jacob in condemning this offensive act of vandalism and support a full police investigation into the matter," Mr Lance said.

Mr Jacob, whose parents immigrated from India in 1986, hoped that this would help him enter the Congress.

After attending Union County College, in New Jersey, Mr Jacob continued undergraduate studies in Sociology at Kean University. Soon after, he studied at Washington University in St Louis, earning a Master of Social Work from the top-ranked program in the nation.

During his undergraduate and graduate years, Mr Jacob was a student activist and leader.
Comments
Indian-AmericanUS Congress in New JerseyUS CongressPeter Jacob