In May, a 17-year-old high-school student of Indian origin from Melbourne and seven other teenage environmentalists, led the legal battle against the Australian government. 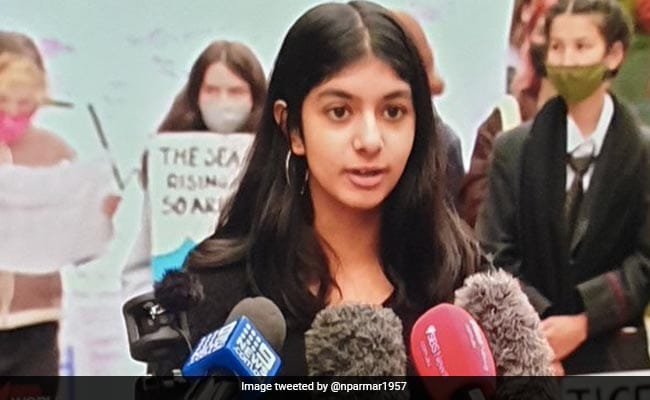 The Australian government on Monday began its legal challenge to a Federal Court's landmark decision that it has a duty of care to protect children from future personal injury caused by climate change, according to media reports.

In May, Anjali Sharma, a 17-year-old high-school student of Indian origin from Melbourne and seven other teenage environmentalists, led the legal battle against the Australian government.

Ms Sharma and the group had argued the continued emission of carbon dioxide into the atmosphere would drive intense bushfires, floods, storms and cyclones and leave them vulnerable to injury, sickness, economic loss and even death towards the end of this century, news.com.au reported.

They urged the court to prevent Environment Minister Sussan Ley from approving a proposal to expand the Vickery coal mine in northern New South Wales.

In his ruling, Justice Mordecai Bromberg approved the extension of the coal mine project.

However, he did find that the minister had "a duty to take reasonable care to avoid causing personal injury" to children when she decided on the project extension under the Environment Protection and Biodiversity Conservation (EPBC Act), a report in news.com.au said.

The ruling was heralded as a significant win for the teenagers and the group of climate activists around the world.

Ley has since given the nod for the mine's expansion.

For Ms Sharma, it was the concern for the environment, her family and future generations, which fuelled her legal charge against the Australian government, a Sydney Morning Herald report said. Born in India, Sharma and her family moved to Australia when she was barely 10-months-old. Her relatives are farmers, who hail from Lucknow.

Growing up, she had heard about global warming and decided to seek more information by watching Youtube videos, the report said.

"Growing up in Australia I consider myself really fortunate," she said. "I got an education that helped me make sense of what was happening," Ms Sharma was quoted as saying in the report.

On Monday, Ley's lawyers told the Federal Court that the EPBC Act was not an appropriate vehicle for the "novel duty of care" as identified by Justice Bromberg.

Her lawyers also contended that the duty of care is "incoherent" with the EPBC Act and distorts her capacity as minister.

They also claimed that there was no evidence that the additional coal from the expanded mine would increase the risk of the global temperature increasing beyond 2 degrees Celsius above pre-industrial temperatures, according to the Associated Press.

"We will proudly defend the historic ruling that all Australian children are owed a duty of care by our government, and fight to protect my generation from the increasing risks of climate change," Ms Sharma was quoted as saying in a statement by the Associated Press.

The eight young environmentalists were congratulated over the May ruling by Greta Thunberg, who rose to the forefront of the youth climate movement after she protested inaction by going on strike from school.

"This is a huge win for the whole climate movement. A big congratulations to the brave Australian teenagers who have achieved this," the 18-year-old Swedish environmentalist tweeted.

"Of course the action needed is still nowhere in sight, but these court cases are symbolic breaking points that could have huge snowball effects," Ms Thunberg had said then.

Last week, Australia Prime Minister Scott Morrison had agreed to attend next month's climate conference in Glasgow, but his government colleagues are yet to approve a commitment to net zero.