"You're Next": As Baahubali Soared, A Picturesque Wink To The Moon

Developed by the ISRO, the Geosynchronous Satellite Launch Vehicle Mark III is expected to play a major role in taking the Chandrayaan-2 to the lunar south pole next year. 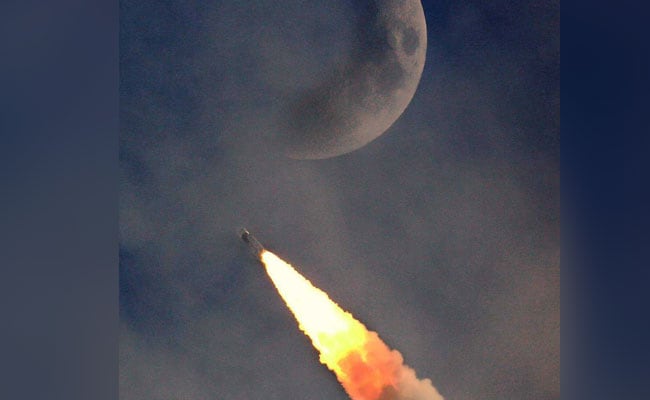 The rocket was launched from the Satish Dhawan Space Centre at 5.08 pm on Wednesday.

When India's heaviest rocket -- nicknamed Baahubali -- soared into the sky from Andhra Pradesh's Sriharikota to place a sophisticated communications satellite in the Earth's orbit on Wednesday, it made for a pretty picture that captured the imagination of space enthusiasts the world over. Particularly telling was a photograph of the rocket alongside a partially shrouded Moon, which -- incidentally -- would be part of its next mission in early 2019.

Developed by the Indian Space Research Organisation, the Geosynchronous Satellite Launch Vehicle Mark III (GSLV Mk-III-D2) is expected to play a major role in taking the Chandrayaan-2 to the lunar south pole next year. The aim of the mission would be to conduct experiments on the Moon and relay crucial information back to Earth.

The photograph released by the space agency shows Baahubali being propelled into the sky by a column of fire even as a brooding crescent hangs overhead, as if in silent observation of a man-made conqueror that would be coming its way before long. If the rocket has its way, the Moon will have the Tricolour grounded on its craterous surface by this time next year.

However, this is not the only photograph to have emerged from Wednesday's successful operation. Selfies taken from cameras placed on the 641-tonne rocket show the lift-off as well as the moments that follow, when its 410-tonne boosters begin belching fire. The final photographs capture the massive 3,423-kg GSAT-29 satellite in the process of separating from the rocket, before being shuffled into its precise position in the orbit.

The Cyclone Gaja did not hinder the launch of the rocket from the Satish Dhawan Space Centre at 5.08 pm on Wednesday. Space agency chairman K Sivan has said that the GSAT-29, which is now in position, will help ensure Internet connectivity across India -- especially remote areas of Jammu and Kashmir and northeastern India. The satellite also carries a laser-based optical communication system that ISRO is testing for the first time.

The GSAT-29 is the 33rd communications satellite to be made by India.