This move comes just two days after the Centre announced the reopening of the Kartarpur Sahib Corridor. 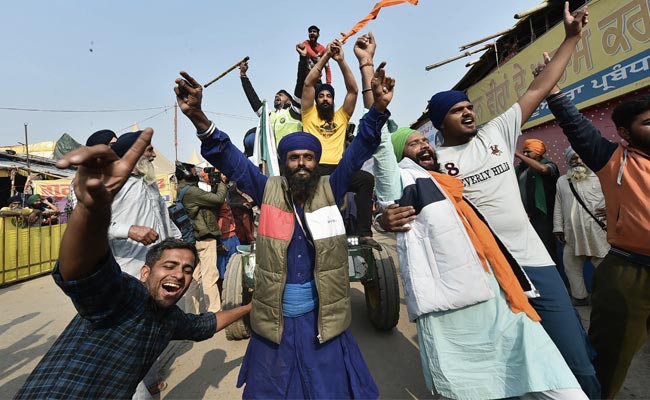 Opposition parties have congratulated the protesting farmers for their "victory" after PM Modi's decision today to repeal the three contentious farm laws that have seen ongoing protests from farmers at the borders of the national capital, and across the country, for over a year now. The Prime Minister chose Guru Nanak Jayanti, the birth anniversary of the first Sikh guru, to make the announcement that might have an influence on the upcoming Punjab elections. The state goes to the polls early next year.

This move comes just two days after the Centre announced the reopening of the Kartarpur Sahib Corridor, the road to Gurudwara Darbar Sahib Kartarpur in Pakistan, which would benefit a large number of Sikh pilgrims.

While Punjab Congress chief Navjot Singh Sidhu hailed the "sacrifice" of the farmers and called the move "a step in the right direction", former Punjab Chief Minister Amarinder Singh thanked the Prime Minister for "acceding to the demands of every Punjabi" on the occasion of Guru Nanak Jayanti.

Repealing of black laws a step in the right direction …. Satyagrah of Kisan morcha gets historic success…. You're sacrifice has paid dividends…. Revival of farming in Punjab through a road map should be the top priority for the Pb govt ….accolades

Aam Aadmi Party chief Arvind Kejriwal said the "martyrdom" of "over 700 farmers" who died during the protests will always be remembered. "The coming generations will remember how the farmers of my country risked their lives to protect farmers and farming," he said.

Most of the farmers involved in the protests are from Punjab and Western Uttar Pradesh. Setbacks to the ruling BJP in the recent by-elections are also said to have motivated the decision to repeal the laws as many states, including UP and Punjab, will see assembly elections next year.

The move will hopefully put an end to frequent clashes between the police and farmers in Punjab and Haryana over protests against the farm laws. Political leaders were also barred from campaigning in both states. BJP and Jannayak Janata Party (JJP) leaders were not allowed to visit their constituencies in Haryana. Akali Dal and other parties faced resistance during poll campaigns in Punjab.

Amarinder Singh, who had backed the recent move by the Centre to expand the jurisdiction of the Border Security force (BSF) in Punjab and other states, is seen as cosying up to the BJP and might get a new lease of political life after this move. He has pointed out in a social media post today that he had been pursuing the matter of the farm laws with the Centre for over a year, and had personally met PM Modi and Home Minister Amit Shah to persuade them to repeal the laws.

‘Huge huge day for all of us in Punjab. I'd been pursuing the matter with Centre for last 1+ year & had met @narendramodi ji @AmitShah ji requesting them to heed the voice of our annadaatas. Really happy they've heard farmers & understood our concerns': @capt_amarinder@PMOIndiahttps://t.co/O8ovK4QGjE

Captain Singh, while announcing his own political party earlier this month, had said that he is working on a seat-sharing agreement with the BJP for the state assembly elections. He reiterated his resolve to work with the BJP today. "This has not only come as huge relief to farmers but has paved way for Punjab's progress. I look forward to working closely with @BJP4India led centre for development of Kisans," he said.

Forgiveness has a high significance in Sikhism and PM Modi in his address this morning has shown some regret which may be received well in Punjab, with Mr Singh expected to help the BJP in electoral outreach.

This move is also expected to force opposition parties to rethink their strategy for the assembly elections among heated discourse about who gets credit for getting the laws repealed. It will also embolden farm unions and make them significant players who can affect electoral outcomes in many seats.